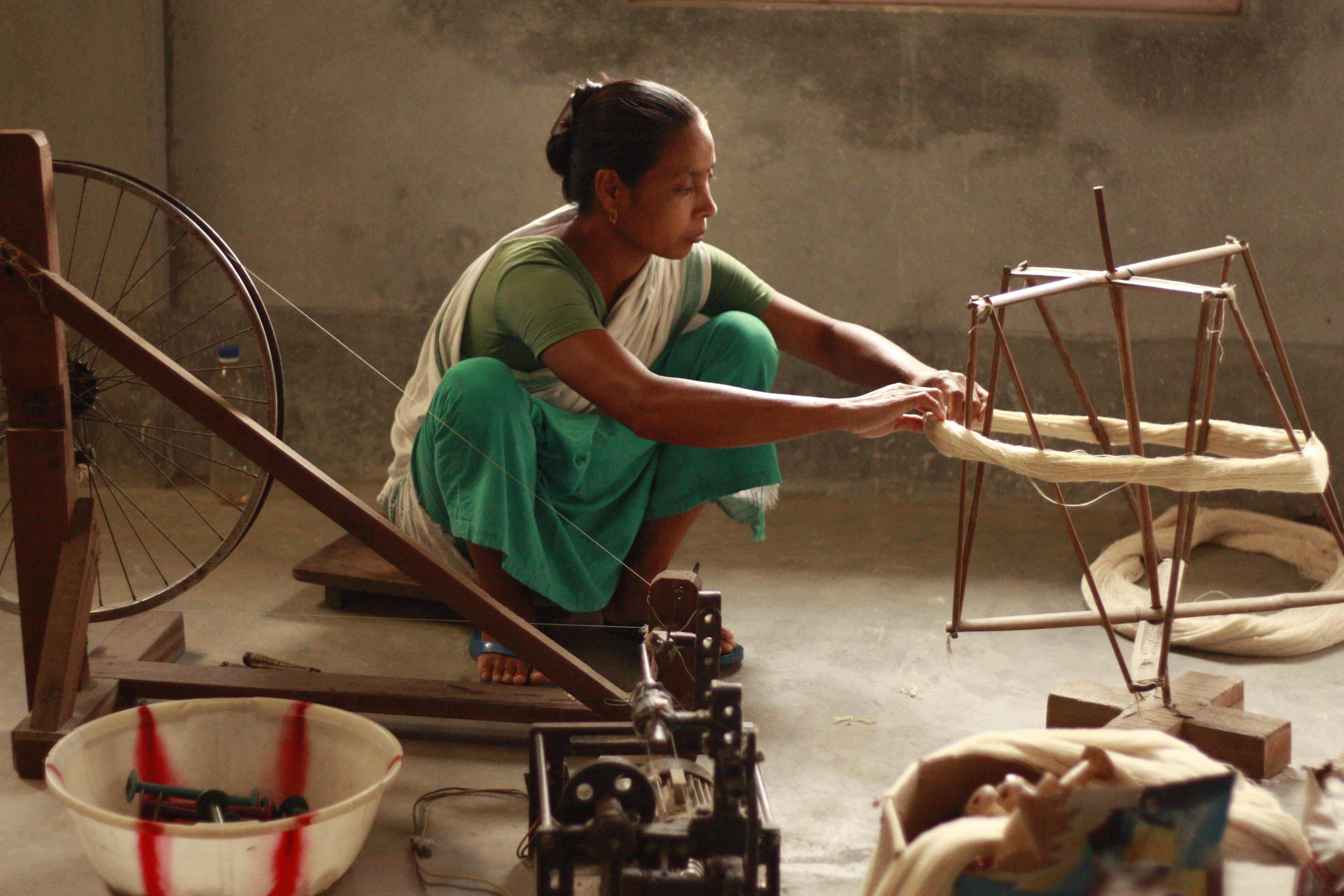 While it is majorly found in the North East of India, Eri is also known as Errandi and Endi Silk. The word ‘Eri’ is inspired from the Assamese word ‘era’ which means castor. The silk worms that produce Eri silk feed on castor plants, hence deriving the name ‘eri’.  Eri Silk is one of the purest forms of Silk that is a true and genuine product of the Samia cynthia ricini worm. Eri Silk is called the father of all forms of cultured and textured Silks. It is the only domesticated silk produced in India, as the process doesn’t involve any killing of the silk worm, also naming Eri silk as ‘Ahimsa (ahinsa) silk or fabric of peace.

Biologically named as Ailanthus Silk moth, this silkworm or known as a caterpillar is generally found in China and Japan. Prominently found in the south Asian regions these Silk moths are predominantly found over the wild trees and shrubs of shorea Robusta and Terminalia.

Eri Silk being the most textured Silk needs a huge amount of preservation and care strategy. It has shorter fibers’ than the usual cultured Silks. The shorter fibers of Eri silk make it less durable. It is indeed one of the softest and purest forms of Silk which is fancied by almost all the Silk lovers and is a staple in every fashionistas’ wardrobe. The silkworms give the Eri Silk a dull yellow, gold like sheen. 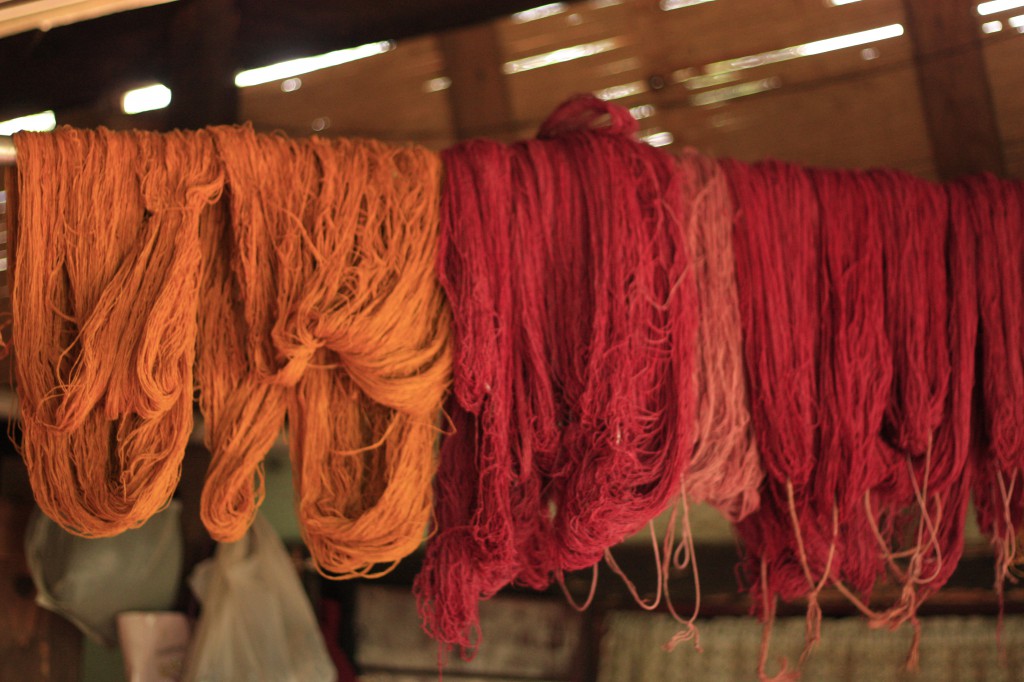 Artists Behind the Fabric

In order to open Eri silk in its original, fluffy form, it is either boiled with soap water or through scouring (cleaning) it in a large tank through the process of hydro-extraction. A coating of ‘sericin’ gum on the filament of the cocoon prevents it from opening with ease. This process is thus known as degumming.

The degummed cocoons are then opened in cocoon opener which helps in further cutting the eri silk fibres to the appropriate length. Fiber Cutting is the next part of the process which involves the cutting of eri silk. Manual cutting is inefficient, hence the ‘twin blade cutter’, modified for eri silk cutting is suitable. Next, ‘Carding’ parallelizes and individualizes the eri silk fibres to maintain quality of the output. It is also essential to open and free the cut eri silk from remnants of insects. Series of gilling and drawing operation make the carded sliver fibres parallel and uniform. The next step involves removing shorts fibers present in the gilled uncombed eri silk sliver. 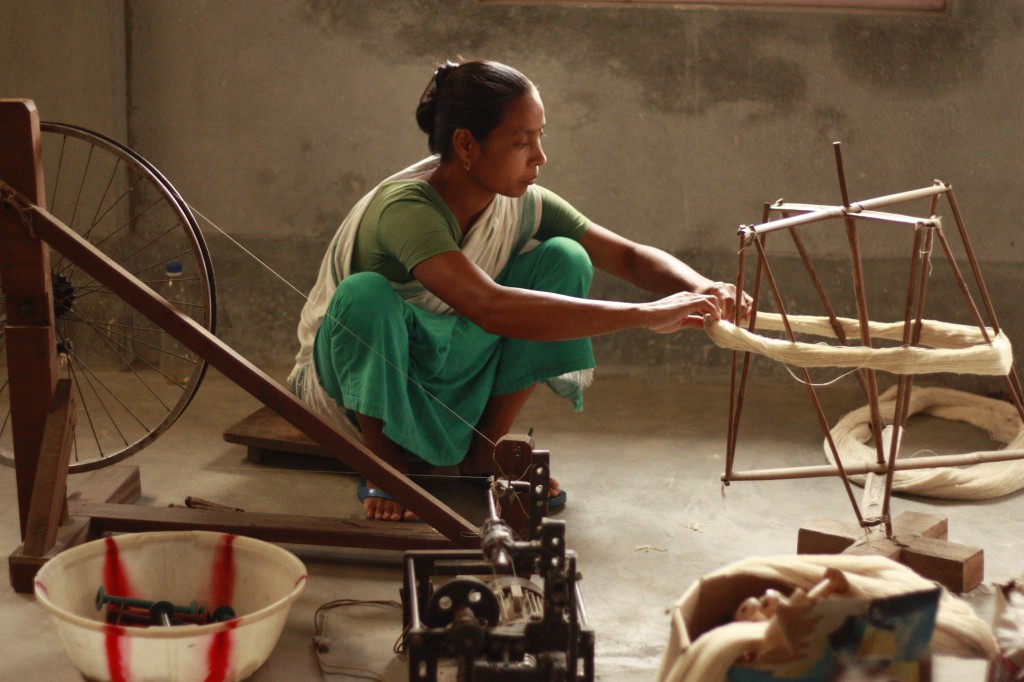 It is most famous for silk drapes and silk saris remain the most significant output of Eri Silk. Besides this, it is used for Orissa’s Pattachitras and Kantha stitches of Bengal, and has also been extensively used as a base material for large varieties of handicrafts, clothing and texturing. Although the original colors of the Eri silk remain dull yellow gold, the inception of chemical dyes enables the use of different colors which makes it more versatile.

What makes Eri Silk distinctively unique and the best amongst the vast ranges of Silk counterparts is its beauty that is added upon by texturing. Much like the Mulberry Silk, the Eri Silk is also textured, but the texturing done over the Eri silk is finer and much more than the mulberry Silk, which ultimately adds up to the breathtaking yellow sheen of the Tussar silk.

History always highlights the fact that Silk has remained a rich or upper class material, but with the development of civilization and discoveries and new inventions made, the misconception broke and Silk has been made available to all groups of people now. Due to its eco-friendly production process (where the Silk is obtained without killing of any living creature), it is the most preferred fabric for Buddhists monks and Vegans.

For any occasion that requires sophistication and a touch of regality, a saree or dress made out of Eri Silk would be the perfect pick for any party or festive event. As far as jewellery goes, one should opt for a more minimal approach. Adornments made out of either Gold or Copper would go best with the ethereal nature of the Eri Silk fabric.

As they are carved out of shorter threads they are not extremely durable, besides the strength of the Eri silk is lost when soaked in water, therefore it is advisable that you get your Eri silk apparels dry cleaned. Since it is breathable it is suggested not to store your clothes in plastic. This shall corrode the effect and shine of your Eri silk apparel.