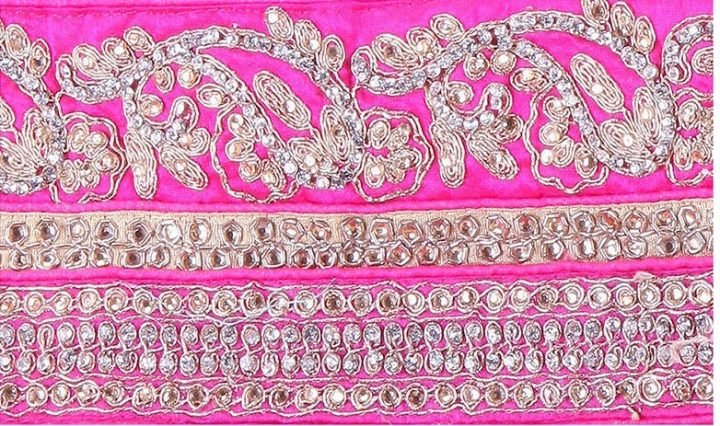 Zardozi is form of embroidery that came to India from Persia. Its literal translation, “zar” meaning gold and “dozi” meaning embroidery, refers to the process of using metallic-bound threads to sew embellishment on to various fabrics. This heavy and intricate style of design is said to have been brought to India with the Mughal conquerors.

It found a base with thousands of artisans who have passed on this trade among their families and local communities. While the Indian city of Lucknow became a major center for this art form, its exact origin is unknown. However, there are many romanticized stories that surround its origin. Till date there are numerous micro enterprises that specialize in Lucknow Zardozi.  It is particularly popular in countries like Iran, Pakistan and India.

Zardozi is a style of embroidery that has its earliest mentions in Vedic literatures, the Ramayana, and the Mahabharata. The original process, known as “Kalabatun”, used silk threads wrapped in real gold and silver wires to decorate satin and velvet fabrics. Along with the threads, other opulent embellishments such as sequins, beads, precious and semi-precious stones and pearls were also sewn on. At its peak, it was used in the Mughal Era by the royalty to adorn tent walls in the form of tapestries and wall hangings, as well as on accessories for elephants and horses.

Lucknow became a central hub for this embroidery technique during Aurangzeb’s reign in the 12th Century, when this imperial art form was encouraged under ruling Mughal beneficiaries.  Their patronage encouraged Zardosi artists to spread throughout India. However, Lucknow remained the main center of production due to the high demand from the city of Nawabs. However, over time, with the rise of gold and silver prices, the use of such expensive materials became difficult and artisans resolved to use synthetic threads or copper wires polished in gold and silver. In doing so, Zardozi was commercialized as a technique, though some of the glory of the traditional heritage of this craft was lost.
The Geographical Indication Registry has accorded all Zardosi textiles manufactured in Lucknow and its surrounding districts with the GI tag. Cities like Hyderabad, Delhi, Agra, Kashmir, Kolkata, Varanasi and Farrukkbadare are also known as Zardozi specialty regions. This has differentiated the craft from imitation products for shareholders and has also helped to retain one of the finest and oldest art forms of Lucknow.

Lucknow Zardozi has more ornate and heavy designs, with a 3D quality to their motifs. This is a similar style to the Delhi Zardozi work, whereas Hyderabad and Agra tend to keep patterns minimalistic, with a focus on simple but large motifs. The inspiration for all motifs has always been nature. From flowers, leaves and trees to animals and birds, the national ecology of India seeps in to all Zardozi embroidery.

The techniques, tools and raw materials used to create Zardozi are the same across India and adhere very closely to the original and ancient techniques.  The basic technique is 4 fold:

• Designing: This is the initial stage of the process, where the entire design is drawn on to a tracing sheet and holes are made along the traced pattern using a needle. While the patterns from the Mughal period all comprised of complex nature, floral and leaf motifs, contemporary patterns are more geometric stylizations of similar motifs.

• Tracing: In order to trace the design on to a fabric, the papers with the patterns are placed on a flat table with the fabric underneath. A kerosene and Robin Blue solution is made and wads of cloth are used to dip in it, which are then wiped against the tracing sheet. This enables the ink from the sheet to seep in to the fabric.

• Setting the frame or “Adda”: The design imprinted fabric is stretched over a wooden frame. The size of the frame can usually be adapted to the size of the fabric. Using bamboo or wooden spars, it is then stretched out and tightly held to give the cloth a uniform tension. The artisans then sit around this frame to begin the embroidery work.

• Embroidery: A crochet-like needle that is fixed to a wooden stick called “Ari” is used to carry out the embroidery. As opposed to a regular needle and thread, the Ari greatly speeds up the work as the artisans can pass the threads both above and below the fabric. Depending on the intricacy of design and number of artisans working on a piece, this phase can take anywhere from a day to 10 days. So the ultimate tool is a steady hand and nimble fingers.

In Lucknow, the raw material to make original Zardozi threads is an alloy of gold and silver. This delicate alloy wire is made by melting ingots that are pressed through perforated steel sheets. They are further flattened by hammering and then converted into wires. Once out of the furnace, these wires are twisted around silk 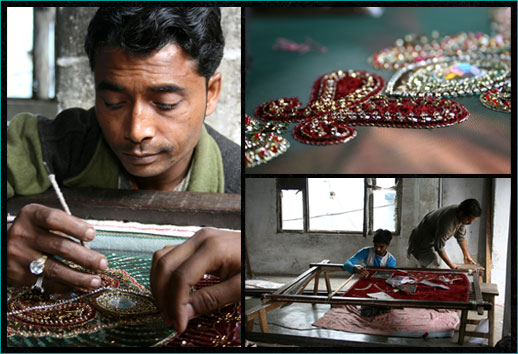 threads to form the thicker, spring-like Zardozi thread. This springy quality of thread called “Dabka” is credited as a Lucknow specialty. It is often combined with sequins, glass and plastic beads.

Lucknow Zardosi in itself is a variety of Zardozi that differs from the other forms of embroidery that bear the same name, done in other cities. Its opulent Mughal influences, for instance, differ from the Tamil influences of Zardozi done in Chennai. 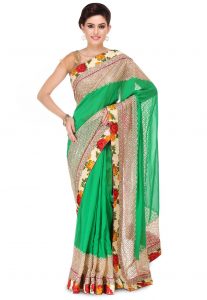 The range of products using Lucknow Zardozi today are endless; dresses, coats, purses, belts, stoles, shoes, etc. While there was a significant drop in the popularity of this craft post-independence, in the last 50 odd years it has seen a steady come back with large local fashion houses bringing it to the forefront at Fashion Weeks.

Many designers have sourced this art from villages that have been specializing in Zardozi for generations. Weddings, festivals and Bollywood films have also been crucial in bringing back ornate Zardozi fabrics that still retain their classic, old-world charm, albeit with newer designs. 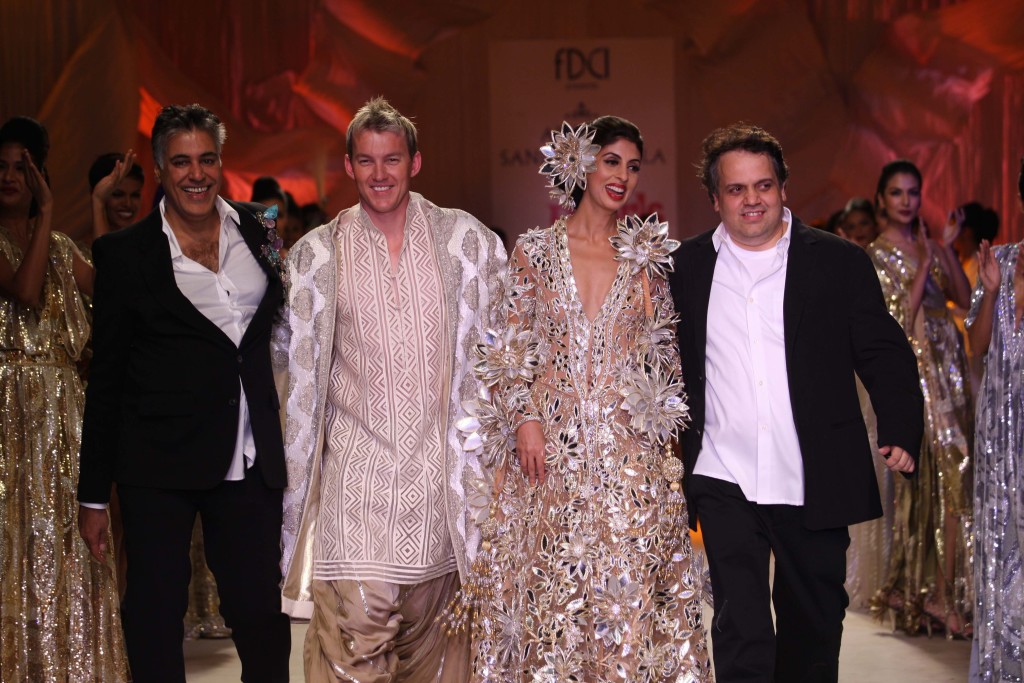 The major innovation in Lucknow Zardozi has been seen in recent years with it major commercial popularity. With the help of modular machines and substitute material blends, Zardozi is available far more commercially than ever before. The richness desired at the time of Mughal royalty is increasingly being replaced with simpler and more economic designs. Pocket-friendly options like copper and synthetic wires can be seen instead of gold and silk threads. The big advantage of this is to make Zardozi far more easily available and accessible to wider customer base, while still maintaining the traditional Lucknow versions as novelty investments.

Considering Lucknow Zardozi work consists of intricate embroidery that sometimes sticks out above the surface, it’s advisable to maintain its sheen and construct with dry cleaning.

• Traditionally only men did Zardozi work, mainly in Lucknow and Kolkata. Nowadays in cities like Hyderabad, there are thousands of artisans, out of which about 10-15% are women.
• Smaller villages around Lucknow keep the tradition of this craft within their family and community. Children start learning these techniques as early as 6 years old.
• Celebrities like Aishwarya Rai and Priyanka Chopra have often chosen to wear sarees and lehengas with Zardosi work for many movie premieres.