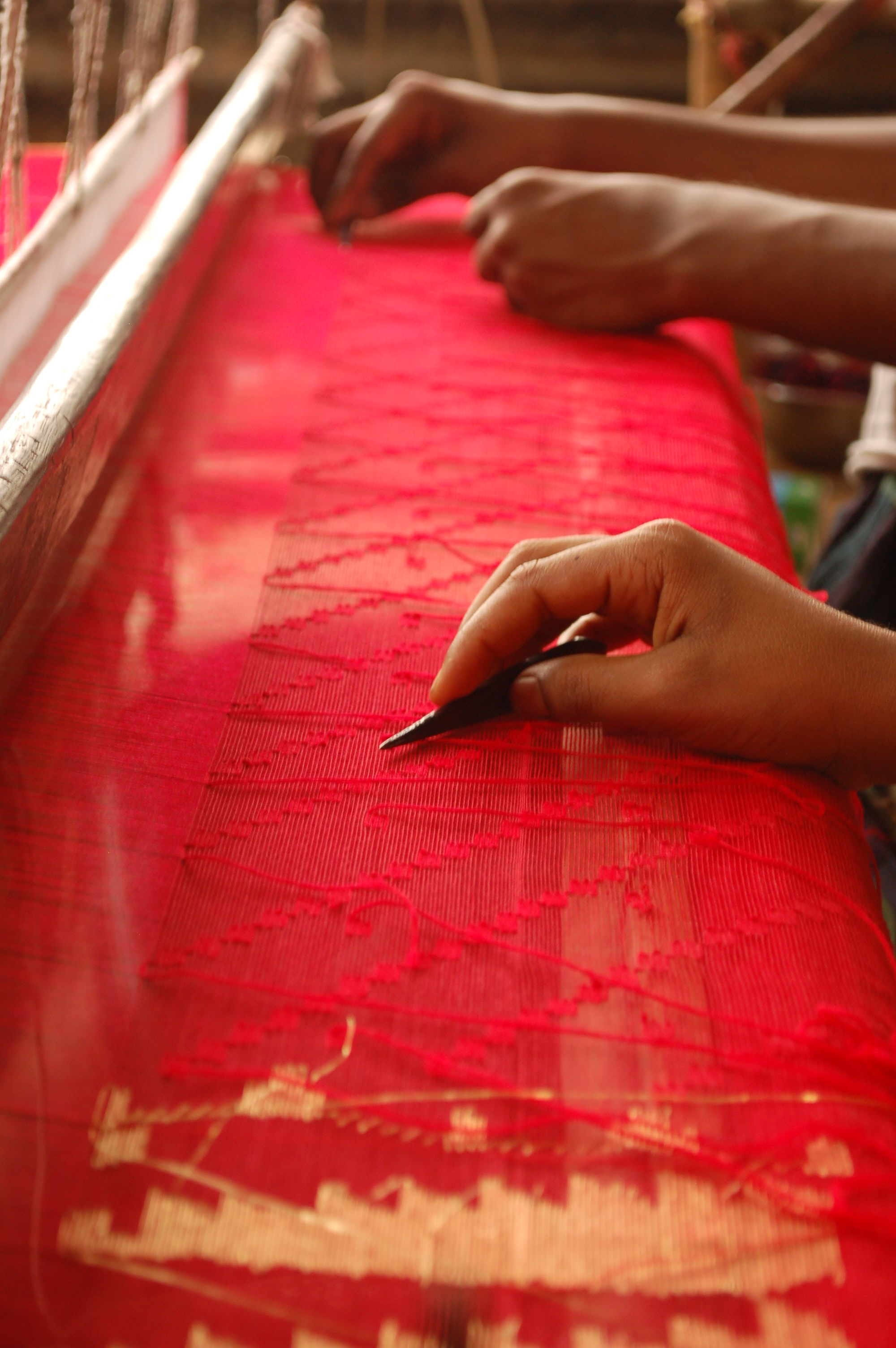 Jamdani, a word of Persian origin, is a combination of the words ‘Jam’ and ‘Dani’ meaning flower and vase respectively. This weave done by loom on brocade is a time-consuming process and is a blend of figures and floral motifs. Jamdani also known as muslin cloth has a weave of the typical gray and white, and sometimes a mixture of cotton and gold thread.

Early mentions of Jamdani were in the book `Arthashashtra’ (book of economics) by an ancient economist – Kautily, dating back to 300 AD.

There are historical references from the early and late 19th century by James Taylor and T.N Mukharji respectively, referring to it as figured or flowered Jamdani and Jamdani muslin. Globally, it was one of the finest muslins known. As early as the 9th century Arab geographer Solaiman mentions this fabric in his book Sril Silat-ut-Tawarikh being produced in Rumy which is modern day Bangladesh. The golden age of the Dhaka muslin began in the 17th century with Mughal rule. Trading of Jamdani in Europe, Iran, Armenia thrived. The Mughals and Pathans followed suit, and it was considered a favorite of the royalty.

Sadly however, the mid 19th century saw the decline of Jamdani mainly due to the import of cheaper but inferior yarn from Europe and the decline of the Mughal empire. The weavers were forced to sell their work at lower prices. Then the East India Company began buying the textiles directly from the weavers to stop the exploitation. From a high point of export of Dhaka muslin worth Rs. 3 million to England in 1787, the exports steadily declined and stopped completely in 1817.

After Mughal patronage and the consequent decline, this exotic weave still continues to be in demand because of its elegance and artistic finish. A rare masterpiece of breathtaking beauty, Jamdani work holds its own among other exquisite garments. Jamdani fabrics are cherished to be gifted. Once fine enough to pass through a ring a Jamdani’s effect is one of a shimmering surface strewn with precious jewels!

Jamdani, like other traditional arts is done by men. Communities of artisans in Uttar Pradesh and West Bengal in India and at Rupgang, Sonargaon, Shiddhirganj ( Bangladesh), excel in this artistic skill.

In contrast to using karpash cotton, today weavers use Cotton and Silk blends. Being a versatile fabric, it can be either woven in full Silk or also with a combination of real gold/silver/precious metal yarn. Jamdani is eco-friendly as it is spun by hand and foot tools. Some designer pieces can take upto 13 months to complete, with two full-time weavers. Banaras and Tanda in Uttar Pradesh & West Bengal respectively, are some places for the weaving of these sarees. 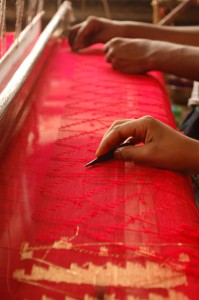 Jamdani sarees, due to their diaphanous nature, drape beautifully and are supple to touch. Dhaka Jamdanis portray multicoloured linear or floral motifs but the mango motif signifying fertility, growth and marital bliss is extremely popular. Tangail Jamdanis have single coloured borders or two to give it a ‘meenakari’ effect, (Jamdani motifs are created on the Tangail fabric). Shantipur Jamdani has delicate checks, stripes or a texture made by coloured threads or a mixture of fine and thicker yarn. Lately tie and dye designs are being done for the pallu (part of the saree draped over the shoulder). The Dhaiakhali Jamdani has a tighter weave with bold contrasting borders and low prices making them affordable. 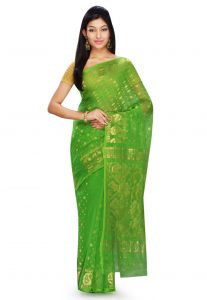 Besides sarees, Jamdani is used in scarves and handkerchiefs. Jamdani work is extensive, a beautiful tapestry of geometric patterns, plants and floral designs. A privilege of royalty, this art is believed to be a union of the age old cloth making techniques of Bengal and muslins which was produced by Muslims in Bengal since the 14th century. 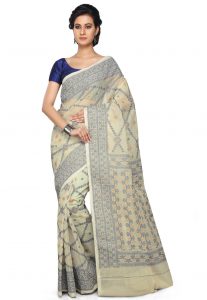 Earlier flowers and leaves were used for dyeing and today chemical dyes are more popular. Keeping up with the modern times Jamdani sarees have on their surface patterns of Rose, Jasmine, Lotus, bunches of Ginger and Sago, even bunches of Bananas.

Jamdani fabrics are expensive and require high maintenance. Therefore they are worn on special occasions. They are shown off at weddings, religious ceremonies and any event that requires exclusive attire.

Recommended cleaning is dry clean only. It is recommended to preserve Jamdanis in a cool dry place inside a zippered plastic bag or a clean white cloth (keep washing this white cloth frequently to preserve the saree well).