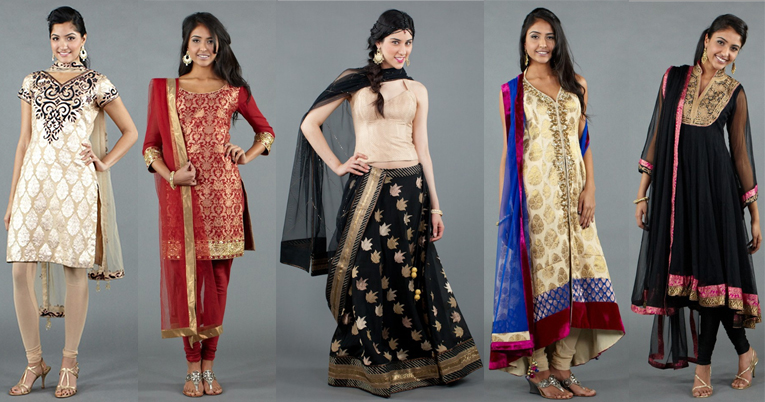 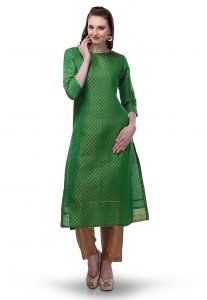 Brocade is an ornate shuttle-woven fabric, often made with colorful threads silk, cotton, polyester, and sometimes with gold and silver threads. Brocade is originally a Kurdish word in Arabic is sometimes pronounced as ‘Brocar’. The word ‘Bro’ means the prophet and the word ‘Car’ means job or craft.

The weaving industry of Brocade textile reached its peak during the Mughal period due to the patronage of Akbar. The Persian patterns and motifs were prominent in this period due to the influence Persian artisans in the court of emperor Akbar.

The embroidery has also been talked about in the Vedic literature.

The art of Brocade spread through Gujarat and nearby areas from Benaras which has a rich history of Muslim weavers. Banarasi brocades are composed of gold patterning known as ‘Kalabattu’. These gold threads have become a signature for the Brocade Indian Fabric.

Brocades also caught the eye of Britishers but they found it heavy for clothing. So they started using the Brocade textile on curtains in the late nineteenth century.

Brocade is typically woven on a draw loom in which each thread can be controlled separately. Brocade is then woven using a weft technique, Brocade is woven. In spite of its intricate weave, the final fabric of Brocade resembles an embroidered texture.

In an effort to appease western tastes, certain designs of the textile have been modified. European wallpaper designs were combined with the famous design of bouquets tied with ribbons.

Brocade fabric was initially limited to haute couture or fashionable magazine covers, but due to its increasing use by designers and craftsmen in Brocade Sarees and home decor products, it moved into the mainstream fashion and became a popular fabric.

Floral patterns are often seen in Brocade fabric. It looks brilliant on bridal attires as it provide a contrasting texture effect in a clothing. The fascination for bridal embellishment has led to a revived interest in this beautiful weave.

Brocade is useful for its skin-friendliness, quality and available at reasonable rates in the market. It is extensively used in making stoles, scarves, dress materials, curtains, cushion covers and many clothing products.

Its global appeal has been extended to the use of sequins and beading as decoration. Many detailed and complex designs are possible nowadays as the Brocade fabrics are now largely woven on a Jacquard loom. It is popularly used in stage shows costumes and the heavy ornated fabric looks beautiful during a play or concert.

Patterns depicting hunting and phulari patterns are increasingly being seen in elaborate Saree borders and coats. Animals and human figures also appear in some brocade shapes, popularly called as ‘buti’.

The production of brocades is becoming more and more expensive due to the pitfalls of the silk industry and the difficulty of polishing elaborate designs. More innovation means heightened labor and manufacturing cost. Yet most of Surat and Banarasi brocade impress a lot of tourists even today.

Extra care should be taken to make the Brocade fabric last longer. Read the specific fabric instructions as some Brocade fabrics can be hand washed while some are dry clean only.

Also, the Brocade garment should not be put in the dryer as it may pull and crush the fabric. It should be dried out flat and away from direct sunlight to ensure longevity.