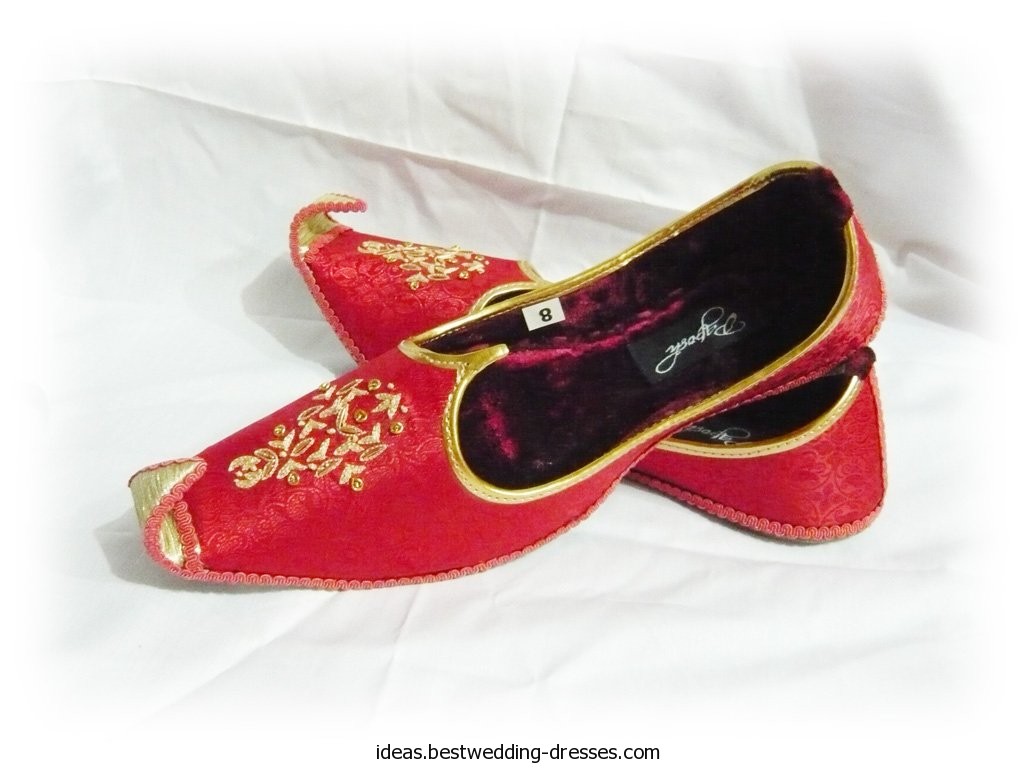 Aughi embroidery is said to have originated in Lucknow, Uttar Pradesh. It was a popular centre for the creation of footwear especially for Mughal royalty. The type of footwear on which Aughi was most popular during the Mughal times was Persian footwear that has at least four varieites. Broadly though, these footwear items were flat leather shoes that were upturned in the front. In fact the mojaris that are commonly worn by Indians today is an innovative version of Persian footwear for the royalty. In the Mughal era however, this form of footwear was worn by both men and women.

Since these items were being created for kings and queens, only the purest form of gold and silver thread was used in the creation of the embroidery. Besides being done directly done on leather, Aughi was also done on velvet covered leather jooties.

This form of embroidery emerged during the Mughal times and was inspired by the need to serve royalty and nobility. This is why threads in gold and silver are used in the embroidery. However, no other metallic threads are used, because gold and silver are the only two metals that are considered royal and worthy of being worn by kings and queens. The Aughi embroidery was coupled with comfortable velvet lining inside the jooti for the comfort of the wearer.

Aughi embroidery is done directly onto the leather, unlike appliqué form of embroidery. It is one of the most strenuous forms of embroidery that is done by hand. Fine threads are used to make delicate and intricate motifs on the leather. The stitching is done using a thick needle as it needs to penetrate the leather. However, the leather is soft at the time of embroidery and is stiffened after it has taken the shape of the jootie using natural substances.

The variety in Aughi embroidery lies in the motifs that were worked onto the leather. The most common motifs were buds and leafs interlocked within intricate wines. Another common motif is a small coin like motif. At times these coins have a small bead or a small mirror at the center.

The variety in items that showcase Aughi embroidery can also be seen in the amount of embroidery done on it. Since this embroidery was done on goods meant for royalty, the embroidery was extensive, intricate and extravagant. It would often cover the entire shoe or a leather wallet. However, ever since the art became commercialized and available to the larger population, items with minimalistic embroidery are also available for purchase. The prices of the items depend on the extent of embroidery on the item added to the cost of purchasing pure leather and pure metallic thread embroidery. 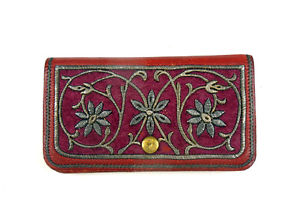 Aughi as an art form has very nearly vanished from existence. Any items that are available are either considered collectibles or are custom-made pieces for highly selective clientele. The craftsmen with the expert knowledge of Aughi embroidery are also very few and practitioners fewer still.

Aughi embroidery was not confined to the usage of gold and silver threads only. At times, it was also done using colorful, robust threads. However, items with this form of Aughi embroidery were very rare and exclusive even in those days.

Aughi embroidery, because of its exclusivity can be worn only during festive and grand occasions. It is best suited as the groom’s footwear at weddings. Gold and silver in itself is very regal, add to that the intricacy of the work and the item becomes perfectly suited for weddings.

In the olden times, leather footwear with embroidery in precious metallic threads was preserved in velvet clothes that were tightly wrapped. The principle of handling the item very carefully still holds true. Leather, especially, should be kept away from water. In case the leather is too tight on the feet, oil can be applied onto the surface using a piece of cotton to loosen it.