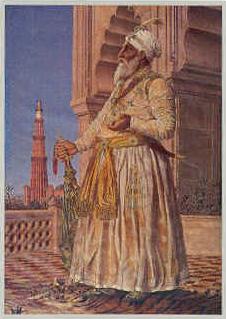 The Nawab of Awadh is a title that was given to the rulers of the Indian princely state of Awadh or Oudh, as it was referred to by the British. The Nawabs of Awadh were a clan of rulers that came from Persia in the early 18th century. Nawab Sa’adat, the first in the dynasty came from Persia in 1724 and established the state of Awadh at a time when the Mughal empire was shrinking. Taking advantage of the situation, he gained supremacy over Awadh and made Faizabad the capital.

The glory of Awadh can be seen in the present day cities of Uttar Pradesh such as Lucknow, Kanpur, and Faizabad. Lucknow, in particular, owes a lot of its present day charm and infrastructure which includes fine arts and cuisine to the former rulers of Awadh, who later made Lucknow their capital.

Awadh was earlier called by the name Lakshmanpur Awadh and is termed as an ancient Hindu state that has roots dating back to the popular mythological legend of Lord Rama of Ayodhya who had gifted Awadh to his brother Lakshman. Therefore, the original name of Awadh was Lakshmanpur which was located in the outskirts of Ayodhya. Hence, the name Awadh comes from the name Ayodhya which was the capital of the Hindu Kosal province.

At a time when the Mughal empire was disintegrating, a soldier in the Mughal army reaped rich rewards when he was made the governor of Awadh. Later this Nazim or Governor became the Nawab. The Nawabs of Awadh received a fair degree of autonomy from the Mughal rulers in Delhi, however, their alliance with the British East India Company ensured that they would not remain independent for long. The British had eyed the wealthy state of Awadh for long and after the defeat of the Shuja-ud-Daula, Nawab of Awadh in the Battle of Plassey, fortunes took a turn for the royal family of Awadh. Nevertheless, despite having to forfeit a lot of its territory to the British, the Nawab still managed to maintain a harmonious relationship with the British and became their chief ally.

What one cannot overlook while exploring the history of this region and era, is the opulent lifestyle led by the princes. Till date, anything related to Avadh, whether its clothes, monuments, food, or jewelry, spells grandeur and defines Indian prosperity. 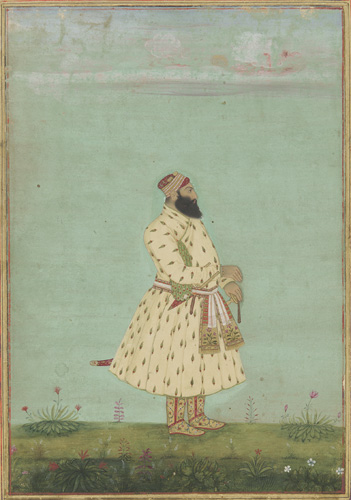 Safdarjung – The Second Nawab of Awadh

The Nawabs of Awadh were very lavish and opulent. They were connoisseurs of fine fabrics and jewellery which can be seen in their portraits. From the usage of finest makhmal or velvet, to mulmul or cotton- the royal robes of the royalty exuded grandeur. There attire had a very dexterous embellishment of zardozi or chikankari work. Even the popular 14th century poet Amir Khusrau had described the fabric of the Nawab’s robes as something so light and transparent that it seemed as if the body was only covered with the dampness of water. The Nawabs in the 18th century wore an embellished ‘choga’ which was like a gown which had a lot of applique details along with embroidered brocade. Even ornate achkan-paijamas and ‘topis (hats) were very common with the princes of Awadh. Common motifs found on the royal garments were that of flowers, mangoes and stars.

The turban of the Nawab was white in colour, having an embellished sarpech adorning it. However, the Nawabs were extremely influenced by the regal finery of the British and even indulged in wearing the Imperial Crown themselves. The crown of Oudh was a huge piece of headgear that had 12 pointed diadems all covered with diamonds with a huge centerpiece ruby. This elaborate crown however could not be worn by the Nawab as it depicted the Nawab’s equivalence with the British Crown which was unacceptable. The umbrella is the symbol of spiritual leadership, be it in this case, of the Mughasl or of the Nawabs.

Another popular dress worn by the Begums of Awadh was the Farshi Pajama that was inspired by the flowing gowns worn by the British women. The Farshi Pajama or Gharara, which is basically a divided skirt that is tight from the thighs and then flows out touching the floor, was worn with a kurta and a dupatta.

Asuf-ud-Daula – The Fourth Nawab of Awadh

The Awadhi royalty have undoubtedly left a lot of priceless heritage in the form of their style of cooking known as the Awadhi cuisine amongst the countless heritage sites. The cuisine of the Awadhis is derived from a mix of Middle East, North Indian and Central Asian flavors and was also heavily influence by the flavors of Kashmir, Hyderabad, Punjab and Mughal food. Apart from the mouth-watering cuisines, the Nawabs of Awadh were great patrons of music, poetry, dance and drama. From the popular ‘thumri’ to the revival of kathak, Lucknow had become a flourishing cultural center under the patronage of the Awadh rulers.