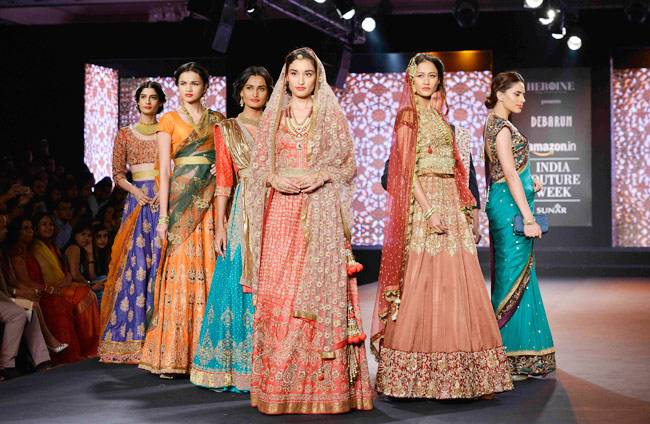 The Amazon India Couture Week 2015 held last week was a star-studded and glitzy affair. While A-list fashion designers wove magic with their collections on one hand, the runway was also a unique platform for Bengal-based designer, Debarun Mukherjee, to showcase his debut couture collection.

Couture Based on Cinematic Influence in India (Image: http://indiatoday.intoday.in)

Taking the evolution of Indian cinema as his inspiration, Debarun perfectly utilized the set to make the experience simply enthralling and unique for the viewers. It doesn’t get funkier than using a voice-over of Amitabh Bachchan’s dialogues and the “Dum Maro Dum” track to present the 70’s and 80’s inspired collection. For any bride who’s in love with Indian cinema, Debarun’s bridal couture collection is the way to go. The flavor of period cinema interspersed with contemporary fashion makes for unique and thematic bridal ensembles.

Two outfits standout in my mind. The first was a grey lehenga paired with a paneled choli modeled by Aditi Rao Hydari. The gauzy textile and shimmery net dupatta lent a very demure yet sultry look, inspired by the black-and-white era of the 1930s and ‘40s. 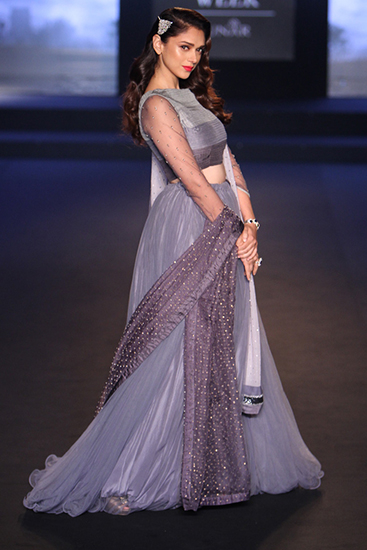 The second is one that was inspired by the Eastman color era. Another lehenga choli intricately detailed with zardozi, applique work in floral motifs in red and burnt orange on an off-white background. Mughal-e-Azam’s famous song “Jab Pyaar Kia Toh Darna Kya” set the ambiance for that ensemble perfectly. 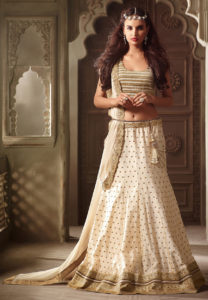 Of course there were so many other epic outfits showcasing the Technicolor inspired palette of the 1970s and 80s to the gradual tone-down of the 90s.