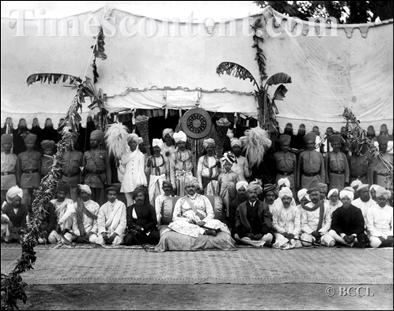 Zamindars were the feudal royalty in India, major holders of land and in accordance lived like kings. The pages in a zamindar’s album illustrated palatial homes, horse drawn carriages and numerous liveried staff at one’s beck and call to attend to their comforts. The zamindars dressed in silks, velvets and the finest jewelry painted the picture of the status of zamindars. Stories of the zamindars’ vaults filled with Golconda diamonds, Kashmir sapphires, Burmese rubies, Columbian emeralds, Basra pearls and even platinum jewelry were passed on from one generation to another, the best pieces reserved for the men folk! 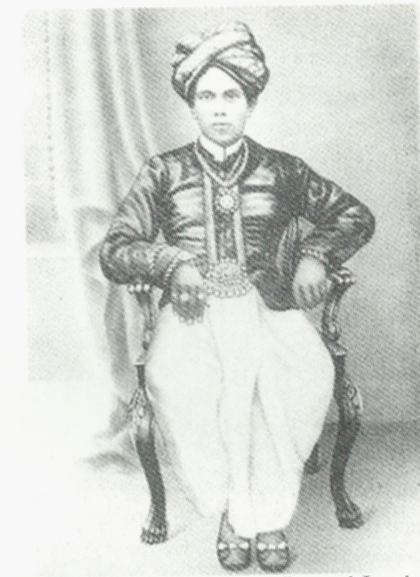 The zamindars, perceived as the Indian equivalent to the British nobility, had existed from the post-Mauryan times and got a boost in the British period. They existed in almost every state from Kashmir, Himachal Pradesh, Haryana, Rajasthan, Uttar Pradesh, Punjab and Gujrat up to Chhattisgargh, Madhya Pradesh Hyderabad, Karnataka and Kerala. Being deemed nobility nothing was out of reach, and the best of silks, fine cotton with intricate weaves, gold and silver work on their attire was taken for granted. Their collection of sarees, such as brocades, Tants, Dhakais, Chanderi silks, Balucharis, Tangails, Tissues, Benarasis and Jamdani sarees were enviable. The men outdid the ladies with Velvet Sherwanis, Silk Kurtas with Churidars, and Suits Cut in the latest fashion from Europe.

The earliest study of sculptures found in the Mauryan period, of the nobility (both men and women) describe the garments worn by them as, flowing , printed and woven with gold, dyed in multiple colors and draped in numerous ways. Only members of the nobility wore their upper garments or Antariyas in the form of wraps that were ankle length. The upper half of the body was draped by what was called an Uttariya. The uttariyas of aristocratic ladies were very fine with embroidered patterns and elaborate borders. Trading bought new diverse fabrics and raised the bar of prosperity.

From 400 (C.E) up to the mid- eighth century, C.E stitched garments made a trend and were associated with the royalty. The murals from the Ajanta caves depict court scenes where rulers are seen in fine transparent wraps, scarves, fine jewelry and detailed headdresses and crowns. Gold coins from the same time shows the noblemen in coats, pants and boots. The historian Ibn Fadl Allah Al Umari mentions that in 997 C.E, at one time there were four thousand silk and brocade workers who solely served the sultan, his family and the favorite courtiers.

The eighteenth century saw an overindulgence in luxury. The story in the court of Oudh in Lucknow says that the pattern of the dress remained the same but the style was exaggerated with the men’s coats trailing the ground and the women’s pajamas so voluminous that young pages were required to carry them.

The Kurta with Chikankari was introduced.Sherwanis, a calf-length fitted coat and an Achkan, a similar coat which was longer, became popular and continued to be associated with formal wear.

With the colonial period, the style of dress changed again and influenced the locals to conform to its ways. Royalties adopted a mix and match dress by wearing royal insignia with cloaks displaying decorations awarded to them by the British. Women still followed the Indian dress of sarees but they started wearing a petticoat under the saree and their blouses, in accord with western fashion, had puffed sleeves, collars, pleats, lace and so forth. The royal ladies were excited by the georgette and chiffon fabrics worn by Europeans and adopted them readily.

Some royals adopted the Jodhpur coat, a shorter version of the Achkan- worn by the north Indian men and polo pants, which were popular in the twenty-first century for formal events.

This lace ruffle in the saree blouse has been given a contemporary touch, and, today, short or narrow ruffles in net, lace, gota, fancy fabric, velvet, tissue, etc adorn the neckline, armhole, sleeve borders and waistline of many a Designer Saree Blouse.

The descendants of many Zamindari families sold their dazzling collections, but some of the royal families today still treasure their collections of a bygone era in platinum, precious jewels and magnificent sarees that are known to have been passed them on to the next generation.

Faces behind the Fashion

The Mughals could be given the credit for the trends made in the attire of the zamindars. The arrival of the Europeans changed the face of the local fashion too with the latest fabrics of the time. Her highness Vasundara Raje Scindia, from the royal family of Gwalior, Madhya Pradesh is well-known world over for her sense of fashion. Some of the fashion icons of the 1900s were, Maharani Indira Devi and Sita Devi of Baroda, Sita Devi of Kapurthala and Gayatri Devi of Jaipur.

India is chiefly an agriculture-oriented country, hence the nooks of each state and territory in the country is filled with villages. Zamindari system having been originated from the villages of India, gives a broad range of clothing varying as per the culture and creed of that region. The style, patterns, designs, colours and fabrics of Indian wear differs from state to state. Each state has their unique tradition, history, and technique for making a saree to state an example.

Some styles of clothes promoted by the nobility are timeless. Outfits such as silk, benarasi, Chanderi, chiffon sarees and others that carry the traditional weaves of India continue to dominate the fashion scene globally. This is perceived in the plush Indian weddings abroad as well as in India. The variety of styles and cuts in Indian attire is astounding and given the exquisite workmanship expensive. The high pricing of these hand made matchless clothes has not stopped Indians and Europeans from indulging in it for special occasions. Pricing starts from Rs.15000/- to Rs.20000 and goes upwards of Rs. 50000/-.