‘Dandiya’ or ‘Dandiya Raas’ is a dance form performed during the time of Navratri, with its origins in Gujarat. The dance attire comprises of bamboo sticks painted in bright colors, women are dressed in three-piece attires called chaniya choli with bandhni dupattas, while men wear sherwani or kurta pyjama. The performers strike the wooden sticks in rhythmic beats, and a drummer standing in the center of the circle commands the rhythm of the dance. People assemble in two circular formations, with the inner circle moving in a clockwise direction, and the other circle moving in the opposite direction. Though often clubbed with another dance form called ‘Garba’, it differs from Garba. The celebrations start after the performance of the ritual of ‘aarti’, whereas Garba is performed prior to it.

Originally performed in honor of Goddess Durga, the dance form represents a battle between the demon Mahishasura and the Goddess. Another legend states that the dance form originated from Krishna & Radha’s ‘raas leela’, hence the name ‘Dandiya Raas’. Also, it was earlier performed only by men, who sometimes used swords instead of sticks in the dance performance.

Dandiya as a dance form has its origins in Gujarat. However, other forms include ‘Dang Lila’ from Rajasthan, where a single stick is used. 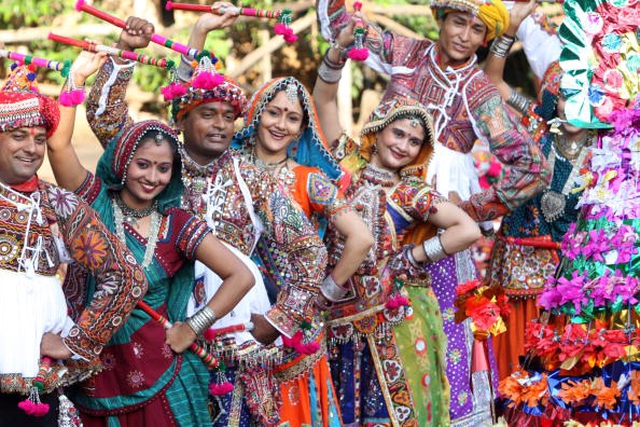 The dance form is quite popular as a dance form, with Indians residing abroad performing the same with fervor at the arrival of Navratri every year.