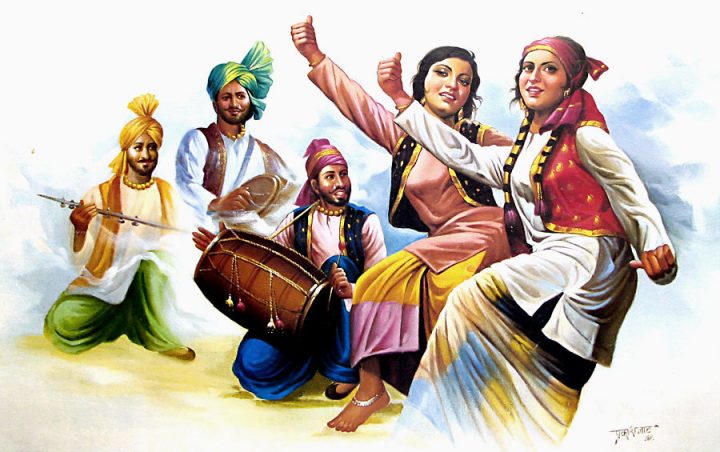 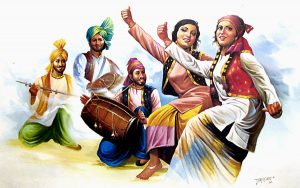 Bhangra refers to several forms of folk dance and music that originate in the Punjab region of India. The dance is generally performed during the Vaisakhi festival that celebrates the harvest. Bhangra has a very energetic and lively tone and the dance is equally vivacious. The festival is celebrated with much pomp and fervor and the dresses worn by the male and female dancers are quite different from each other although both are a reflection of the joyous celebrations.

The Bhangra is said to have started by Punjabi farmers in the 14th or 15th century to celebrate the harvest season. As time progressed, the Bhangra became used in almost all major celebrations in Punjab such as weddings or festivals. The Bhangra is danced to the rhythm of a drum, known as the dhol.

One of the other accounts of its origin dates it to the 1880s as a community dance in the month leading up to the Vaisakhi festival. While the dance has now spread to not just Punjab in its entirety, but India and many parts of the world, at the time of its origin it was prominent only in Gujranwala, Sialkot, Gurdaspur and Sheikhpur areas of Punjab.

The dresses that are worn during a Bhangra performance are very bright, bold and colorful to symbolize the joyful and celebratory nature of the occasion. Since there is a lot of movement associated with this dance form, it is very important that the dresses allow the dancers to move freely. This is why the clothing worn by the dancers are loose fitting so as to ensure that body movement isn’t constricted. Bright shades generally mean different things. For example, Yellow is used to symbolize sarson or mustard, green symbolizes prosperity and red/saffron symbolize the auspicious occasion itself.

The wearing of the turban by male dancers is very important as it represents the pride as well as honor of the people of Punjab. Women wear long flowing clothes as well as fine jewelry for elegance and grace.

The Bhangra dress is quite vivid and colorful and is quite similar to the clothes worn every day in Punjab although the hues of the clothes worn on a daily basis are lighter. The style of clothing worn by men when performing Bhangra is different than the type of clothes worn by women. However, they share certain similarities such as color and fabric.

These are the parts of the Bhangra dress worn by men: 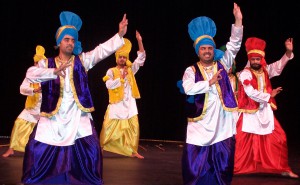 All elements of the costume is made of light yet shimmery, silken material. The Chadar along with the Jugi and Pag may have embroidery or embellishments along their borders. The Jugi especially is one of the most heavily embroidered elements in this entire ensemble, reflecting the grandeur of this celebration.

These are the parts of the Bhangra dress worn by women:

While a Salwar Kameez is the most commonly worn clothing worn by dancers during a Bhangra performance, some choose a Lehenga Choli or a Sharrara instead. One characteristic feature of the Giddha dance is the paranda, which is a tassel that is woven into the braid. Because this dance is performed at the most auspicious occasion of Vaisakhi, the tassels at the end of the paranda are golden in color. The dupatta usually has gold gota work along the border which adds to the regale feeling of the celebration. A short waistcoat can also be worn by the women, which like the men’s is elaborately embroidered.

The performers both men and women wear bright colors, as already mentioned. However, it is essential to note that many-a-times the top wear can be in a completely different color from the bottom wear. Moreover, it is not necessary that all the men in the performing group or all the women in the group stick to a uniform color scheme. It is possible for all individuals within the performing group to wear different colors and still add to the vividness and vibrancy of the dance.

The influence of Bhangra can be easily seen in Bollywood, however, it has reached a far wider audience. Moreover, the traditional moves of the Bhangra have been taken to global platforms like America’s Got Talent along with these vibrant costumes, without which Bhangra wouldn’t be what it is. The costumes help the larger audience identify the dance even before the performance has started.

The turla that is worn on pags are a fairly recent addition to the dress worn by bhangra dancers and so is the Phummans which are small balls attached to ropes on each arm.

The pag has to be tied before each show and is not readymade like a hat. Dancers usually require assistance when tying a pag. The Pag is undoubtedly the most important part of the male dress. It is different from a normal Sikh turban in the way that it is tied. The style Pag is more along the lines of the head dress of the community of Jatts in rural Punjab. The turla is usually made from one end of a pag that is heavily starched. Dancers may also choose to tie a chunni around their waist and sport juttis for their feet. However, they usually prefer to dance barefoot.

The dupatta worn by women is usually draped over the head and is fasted to the dress with safety pins so as to ensure that it doesn’t fall during the performance. The parandha is woven into the braid and long parandhas are preffered by the women folk. When wearing a Salwar Kameez, the Kameez is usually of a contrasting color from the dupatta and the salwar.  They also like to adorn themselves with a lot of jewelry when performing the dance. 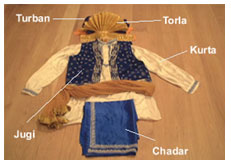