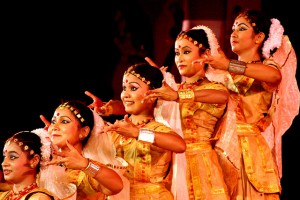 Assam is a land known for its animated colors, rich history and a culture which is basically a hybrid of many different traditions and values. Assamese ethnicity is extremely popular when it comes to different handicrafts and visual arts, namely dance. The Sattriya dance, which is a prehistoric Indian classical dance form, is amongst the 8 most renowned Indian traditional dances. The perfectly executed hand movements, bright and dramatic colored sarees, exuberant expressions and a sense of gaiety that creates a halo around this dance makes it nothing less of a visual treat for the spectators.

The inception of the Sattriya dance dates itself back to the 15th century, and this dance form is approximately 500 years old. Unlike some other classical dances intrinsic to Assamese culture which have undergone several innovations in terms of technique and style, the Sattriya dance has been left untouched in this regard and has been the same since its birth. The great saint Srimanta Sankardev was the founder of this dance and gave it the recognition and popularity, which till date stands extremely strong. Under the patronage of Srimanta Sankardev, the social and religious group known as the ‘Sattras’ formulated this dance to celebrate their beliefs which were embedded in Hinduism and its various teachings.

What is interesting is that initially this dance form was only performed by males; female dancers were introduced to this dance much later.

The one feature of this dance which stands out is the costume and the entire ensemble that looks like a unification of various colors that all interlock together and form a unique and distinct style which exhibits Assamese grandeur and cultural legacy.

Assam Silk Sarees are extremely popular, not only in Assam but throughout India and abroad. The subtle sheen and fine Silk threads are woven to form exquisite designs and motifs that are individualistic and diverse in style. The Sattriya dancers opt for these Silk sarees when putting together their dance attire. Pat Silk and Muga Silk are the two kinds of sarees used by the dancers. The reason Pat Silk sarees are so popular with this dance form is because of the various local motifs used, which represent the flora and fauna found in Assam.

A large red bindi on the forehead, dark kohled eyes stretched to form dramatic looking eyes, red or coral colored lips and flowers to adorn the hair are some of the basic embellishments used in addition to the rich looking Assamese Silk sarees worn by the dancers. A mix of Gold and Silver jewelry is used, which forms a head gear, waist belt, earrings and heavy neckpieces.

The Sattriya has gained immense popularity in the department of visual arts, not only in India but also in countries like U.S. and U.K., where the importance of Assamese culture has gained new ground in the last several years. Alongside the beautiful dance form, the Assamese jewellery designs and Silk sarees have also gained popularity across the globe. Usha Rani Baishya, who is a popular Sattriya expert across Assam, has graced this age old dance technique in several shows which have also strengthened the popularity of this dance style.