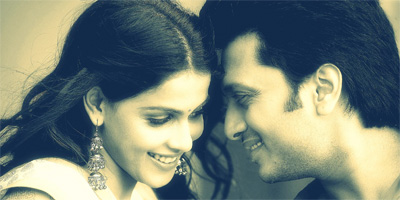 They refer to each other as ‘terribly unromantic,’ but love shines through their eyes. She is a cute, gorgeous performer and he is a gentleman besides being a humorous actor.  A couple that’s truly made for each other, Riteish and Genelia are Bollywood’s bigwigs, known for their comic timing and excellent acting abilities. Their decade-long relationship reached its pinnacle when they tied the knot on February 3rd, 2012. The celebration was a glitzy wedding that will stay memorable for years to come.

The world knew that they had been dating for over 10 years. Their fans know that they met  during the shoot of their debut film, ‘Tujhe Meri Kasam.’ But what they don’t know is that Genelia assumed that Riteish was just another spoilt, politician’s son, while he thought that she was an arrogant South Indian Star in the industry. Once the erroneous beliefs were shattered, the two went ahead and dated each other. Even though they kept the details wrapped, the couple confidently came out with their relationship and everyone knew that they were meant to be. Marriage ceremonies, including traditional Sangeet was held on January 31st, 2012. Two wedding ceremonies were held on February 3rd, including a traditional Maharastrian wedding and later a private, solemn Christian wedding.

The Wardrobe of the Couple

The wedding and pre-wedding rituals will perhaps be remembered the most for designer, starry outfits that the couple wore. These dresses, custom designed by Indian fashion designers like Shantanu and Nikhil, Manish Malhotra and Ritu Kumar were just perfect for the couple.

The grand pre-wedding ritual was held in the famous Taj Lands Hotel in the city of Mumbai. Celebrated on January 31st, 2012, the wedding ritual saw Genelia wearing a beautiful, custom Lehenga Choli in white and pink, designed by Manish Malhotra. The actress, who is known for a cute face looked adorable in the Lehenga, which accentuated her height besides bringing forth her sprightly personality. Netted sleeves made it a comfortable attire. The embroidery, especially on the neckline used pink tones, adding sophistication to the aura of her Sangeet ceremony. The stunning diamond jewelry complemented her chic, sophisticated ensemble.

Riteish complemented her charmingly in a contrasting blue and white Kurta- Pajama. Instead of going for tight churidar Pajama, he went for Salwar Style bottom which gave off a more masculine appeal. The blue colored Kurta, a Sherwani-styled suit elegantly contrasted the Pajama and worked well for his wheatish complexion. 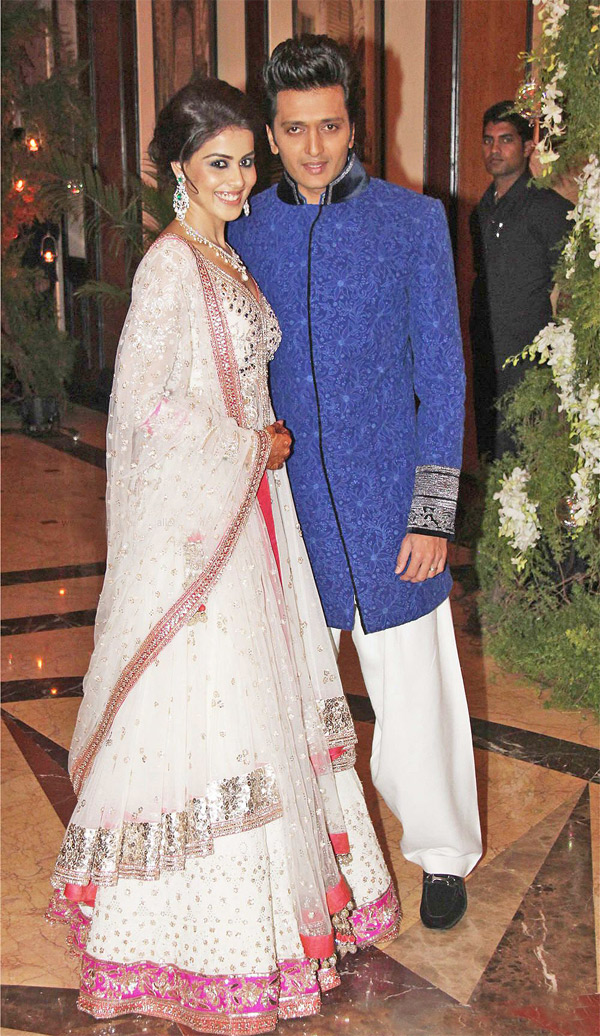 Held on the morning of February 3rd, 2012, the first wedding saw Genelia looking dapper in a sari, while Riteish looked royal in his Maharastrian Kurta-Pajama. Held in the Grand Hyatt Hotel, the wedding was performed in a traditional Maharastrian style. Genelia’s sari was custom made by Neeta Lulla who used yards of silk to craft the stunning red colored sari, the traditionally rich color of an Indian bride. While the vibrant hue accentuated Genelia’s stunning features, it also added to the overall theme and lighting of the wedding venue, providing a holistic look to the wedding.

The gold color embroidery was a perfect complement to Ritesh’s gold sherwani, which was designed in a cream-white tone. The embroidery used subtle Indian designs, including borders and Mango Seeds to give it an authentic look. The bride and groom wore traditional headgear made of pearls in white. While the actress had several bangles on her hand, Riteish had a beautiful silk turban adorning his head. 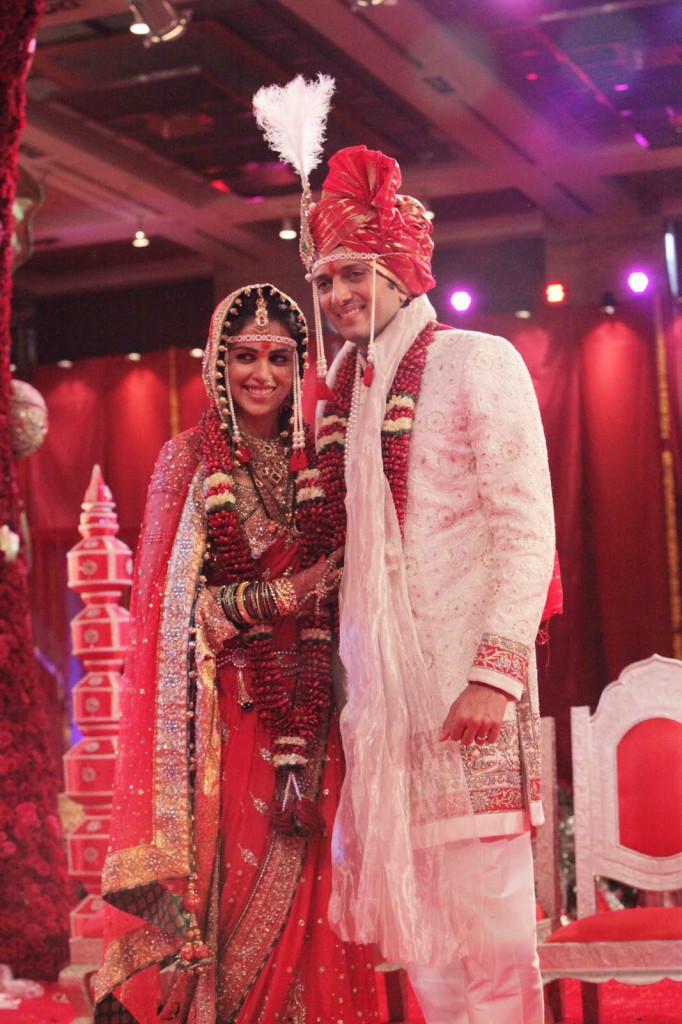 Since the D’Souza Family appreciated Deshmukh’s culture and wedding rituals, the latter reciprocated the same with an enthusiastic and private Christian wedding. Held at St. Anne’s Roman Catholic Church in Bandra, Genelia stepped out looking elegant and rapturous while wearing a Nikhil and Shantanu bridal gown. Designed with intricate detailing, the gown had a V-Neckline, which worked in favor of Genelia’s petite frame. The actress’s look was further accentuated by net artwork and borderie-angalise design, which simply reflected the kind of craftsmanship that went into the making of the gorgeous gown. A long veil completed her look.  On the other hand, Riteish wore a traditional black suit which made him look suave and stately. 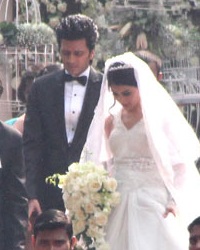 Held a day later, the reception was starry, not just because of celebrities wishing the couple, but also because of the uncut diamond jewelry, or in other words, Polki diamonds that Genelia wore for the event. The dark peach Lehenga worked wonders for her wheatish skin tone and she appeared elegant and glamorous at the same time. Designed in mixed fabric, the dress complemented the Black Sherwani that Riteish wore for the ceremony.

Witnessing a guest list which included the Bachchan Family, Khans , and a renowned list of politicians, the wedding ceremony between Riteish and Genelia was truly a remarkable event that left indelible imprints on the hearts of Bollywood lovers!