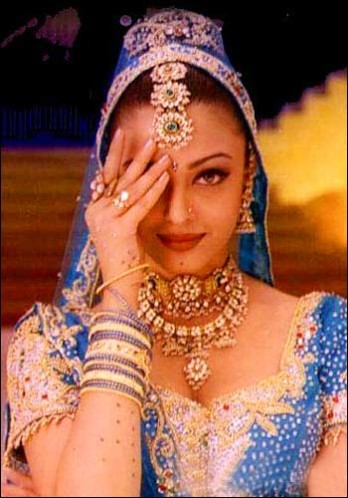 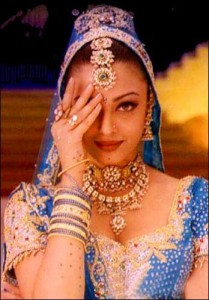 Aishwarya in the Movie (Source: entertainmentfest.com)

Aishwarya Rai left everyone amazed with her gorgeous look in Bollywood drama ‘Hum Dil De Chuke Sanam.‘ A romantic drama set in the Gujarat – Rajasthan border, Hum Dil De Chuke Sanam released in 1999. Sanjay Leela Bhansali wore several hats in the making, by writing the screenplay as well as producing and directing the film which is influenced by a German novella, ‘Immensee’.

Shot at the picturesque Vijay Vilas palace built in 1929 Mandvi town in Gujarat; the domes, colored glass windows and beautifully stone carved elements with lush gardens and water fountains make an effective backdrop for the film. The stone work on windows and door panels, have been done by architects and craftsmen from Jaipur, Rajasthan, and Bengal and reflect the Indian grandeur.

Aishwarya has received two ‘Filmfare’, two ‘Screen’ and two ‘IIFA’ awards for her roles in the Hindi film industry. The doe-eyed Aishwarya Rai who won the title of Miss World in 1994 and called one of the most beautiful women in the world is well known for her role in this iconic film. One of the most noticeable aspects of the film Hum Dil De Chuke Sanam is the bright gorgeous hues worn by Aishwarya. Nandini her character is playful, a little spoilt and outspoken in the film. Her persona reflects the values and customs of a Gujarati girl. The dressing is romantic and elegant complimenting Aishwarya’s graceful form yet contemporary at the same time.

Aishwarya in a Song (Source: songshl.com)

Playing a Gujarati girl in the film Aishwarya’s wardrobe consisted of a vast array of ghagra cholis. Her tasseled cholis with Gujarat’s embroidery and mirror work stands out in the scene where Aishwarya and Salman are shown on the terrace with the full moon behind them. The famous number ‘Nimbooda’, got her fans crazy with the mini blue ghagra and ethnic jewelry. The actress looks resplendent in the blue and green ghagra choli with a delicately edged dupatta. The costumes for the film have been designed by Shabina Khan and Neeta Lulla. Leading designer for the Hindi film industry, Neeta Lulla has a long association with Aishwarya and has crafted the apparel for the film keeping in mind the complexion, light eyes and lissome frame of the actress.

The warm Rajasthan sands were a perfect canvas for the shimmering colors worn by Aishwarya Rai. The first half of the film has the actress in ghagra cholis and net lehengas with heavy ethnic accessories. The tasseled cholis with mirror work, blue-purple crystal lehenga along with crystal jewelry. The ghagras were not too heavy keeping in mind Aishwarya’s figurine and the use of bandhni was in a different way on blouses and edgings of lehengas and dupattas. The mirror work was done with a combination of three or more colors but created delicately.

The deep necked blouses, cotton saris and ghagra cholis became a hot favorite with the success of the movie. That a simple cotton saree would become a style statement wasn’t envisioned before the release of Hum Dil De Chuke Sanam. Aishwarya lent grace and beauty to the saris worn in the film; her delicate figure accentuated the patterns while underplaying the sensuality. Simple yet elegant cotton sarees designed by Neeta Lulla were major part of her wardrobe in the second half of the film.

The materials for the saris in the film were cotton, Georgette, net, net viscose and blended silks. Aishwarya’s three-piece lehenga choli in orange-red and mustard colors were a hit. The mustard colored choli had a neckline emphasized with mirror work and silk embroidery and bead work all over. The lehenga in orange-red had mirror work on the hem line. The dupatta had mirror work on all four sides in a shaded orange-red and mustard color. The jewelry on her long plait in the song ‘Anhkon Ki Gustakhiya’ with a bold maang tika were astonishing enough to create a new trend for the ladies out there.

Aishwarya wore a lot of Kundan jewelry in the film that included light-beaded necklaces. Jhumkas with stone embellishments, heavy and light Mang Tikas, faux diamond jewelry and long necklaces were part of the Indian outfits that she wore in the film. Aishwarya wore heavy pearl encrusted earrings and silver sets to match the beautiful lehengas, that definitely was a fashion wave in Indian Ethnic Fashion.

The saris worn in the film by Aishwarya are not very heavy and suits warm and temperate climates. The lehengas on the other hand are made from a mix of heavy to light material. The heavier and ornate dressing is meant to be worn on festive and special occasions. The saris donned by Aishwarya could be conveniently worn across casual events, next-door gathering, official purposes.

The cottons can be washed at home after a first time dry cleaning in case of multiple colors. Cottons are easily starched at home to get that crisp feel and look. Lehengas are generally dry cleaned due to the embellishments on them. These are best stored away from sunlight in a dry place with plastic covers.