Nagaland, a land full of craftsmanship- from domestic articles to clothes, from pottery to jewelry, the people of Nagaland know how to display their culture in effortless style. The most prominent item of their dress is the Shawl. It varies from tribe to tribe.  The Ao warrior shawl is called the Tsungkotepsu with figures of mithun (local bison), tiger, elephant, human head, cock, Dao and spear which make it strikingly picturesque. These shawls are woven with clear narrative stories which act as a mantle of merits for the hunters of the tribe, making it their most prized possession.

Tsungkotepsu was initially a warrior shawl worn exclusively by the male members of the Ao tribe of Nagaland, especially the rich ones who have performed the sacrifice of a ‘mithun’ (local bison), is entitled to wear this shawl. A ‘mithun’ (local bison), symbolizes wealth. In the olden times, the right to wear the shawl was given to those warriors who used to behead enemies during a battle. 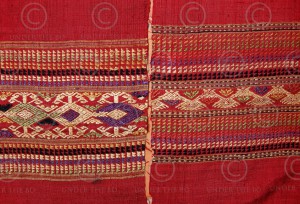 It is usually made on a dark base, the cloth has a middle white band and on either side of it are horizontal bands of distinct black, red and white. The center band is painted with a pattern in black which has the figures of mithun (local bison), symbolizing how wealthy the owner of the shawl is. The elephant and the tiger pattern prints on the shawl symbolize the strength of the man. The human head among these represents success in head hunting. There are also patterns of few other things like spear, dao and cock present on the shawl.

Women of this tribe wear a skirt, which is one and a quarter meter long and about two-thirds of the meter drapes round the waist and the surface outer edge is implanted for the grip. They have red and yellow-black stripes woven on a red or a black dress.

The Tsungkotepsu or the warrior shawls of Nagaland have a unique place in the fashion and textile history of India. With the changing times, the elders from the community altered the rules and allowed the younger generations to adorn this shawl whenever they chose to, however keeping the basic tradition and culture in mind.

A surfeit of new patterns and motifs has been introduced reflecting the younger generation’s fashion sense and status. These shawls are now available in brighter colors, changed motifs and patterns, and avant-garde designs for the young and the educated. Due to their increase in demand, these shawls now represent the culture of Nagaland at large rather than just warrior stories and successes.

With its bright colors and bold motifs, these shawls can be accessorized the way an individual wants. In the past these shawls were worn with large beaded neck pieces, however now with the changing trends these shawls are now used as an accessory with various dresses, whether it’s an evening dress or a traditional Indian costume or just a casual jeans and t-shirt. One can mold it in whatever form they want to.

The Indian fashion industry is famous for imbibing designs and style from various sections of society and also from various eras. Elements of Naga culture and influences have been incorporated in the recent fashion collections. The geometric patterns and loud colors are its unique selling points, and make it stand apart from the rest in more ways than just one.

On a worldwide platform, the Tsungkotepsu shawl has sustained itself through the test of changing fashion and has been in popular demand by the tourists. The motifs and patterns on these shawls have influenced many designers across the globe. These shawls are also teamed as an evening wrap and stole which has become a popular style statement across borders.

The struggling craftsman of Nagaland are trying to keep the legacy of weaving alive by handing down the craft to the generations that come but with the changing fashion trends this may be an uphill battle. Many upcoming designers from the north-eastern region of the country are trying to keep the Tsungkotepsu motifs and designs still alive by merging them with current fashion trends.