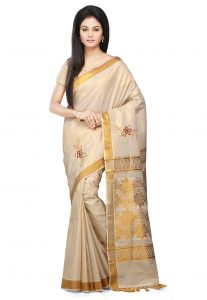 Mundu is a single piece cloth or garment worn around the waist, and treated as Bottom in Kerala. Worn by both men and women, Mundu has its variants for both the genders. It looks similar to Lungi or Dhoti. Mundu comes in single and double drape, depending upon the desired style of drape, bordered in gold, zari or different shades.

For women, Mundum Neriyathum is the traditional clothing attire. Just like the saree, it also consists of two pieces of cloth, mundu and neriyathu, worn with a blouse. While mundu refers to the lower part of the garment that is worn waist downwards, neriyathu is the upper part of it which, is either tucked into the blouse or worn over the left shoulder. Mundum Neriyathum is also known as Set-Mundu or Set Saree, because of the two Mundu.

For men, Mel Mundu is the traditional attire. Just as Mundum Neriyathum, this too is a two piece garment for men, which is worn with a Shirt.

The stories are plenty, when it comes to origin of Mundu and its variants. Neriyathum was an extended form of Saree showcased in Buddhist and Jain Literature called ‘Sattika’, while Mundu was refereed as Antariya.

Palmyrene – a Graeco-Roman costume gave ‘Palla’, a long piece of unstitched cloth with a colored border worn over a long garment, pinned at the left shoulder.

The Malabar Coast used to have a flourishing trade with the Mediterranean world since times immemorial. And since the Mundum Neriyathum is believed to be an adaptation of the Graeco-Roman costume, palmyrene, it must have been the traders who introduced it to South India where it evolved over a period of time.

Although the Mundum Neriyathum is usually worn for everyday use, it has also evolved over time in various forms as mentioned below:

Set Mundu: It is the very basic form of the Mundum Neriyathum comprising the mundu and the neriyathu and is worn for daily usage.

Kasavu Mundu: It is the festival special variant of Mundum Neriyathum. The neriyathu of the Kasavu Mundu has a golden coloured border or one that has a broad Zari border. It is worn by women of all ages in Kerala during the festival of Onam to take part in the women only folk dance, kaikottikalli.

Set Veshti: It is yet another form of Mundum Neriyathum. It comprises of the mundu and a small piece of cloth, resembling a blouse, to cover the upper part of the body. It does not have a pallu.

The Mundum Neriyathum, until as recently as the 1970s, used to only have a mundu worn with a blouse or a veshti (small piece of cloth to be placed on shoulder by men) The pallu came into existence only a few decades back when women in Kerala started covering the upper garment with a pallu. Over time, the festive variant of the Mundum Neriyathum, known as the Kasavu Mundu, also came into existence which usually has either a golden colored border or a broad Zari border. 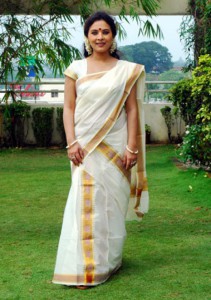 The Mundum Neriyathum did not have many variations except for the fact that a festive variant of it came along with the daily usage one. It is known as Kasavu Mundu and has a golden colored border or a broad Zari border. It also came up with a pallu in the late 1970s which was not there in the original form of the Mundum Neriyathum.

Although Mundum Neriyathum is generally worn by the women of Kerala as a daily wear, its more contemporary version, called the Kasavu Mundu can be worn during various festivals or special occasions as well.

Mundum Neriyathum is very low maintenance attire as it is basically used as a daily wear by the women of Kerala. Therefore, it can be washed with normal water under normal household conditions.

Since Mundum Neriyathum is basically a daily wear garment and is restricted only to Kerala, it does not provide for much of a scope to have a future in the fashion industry. However, having said that, the Mundum Neriyathum did manage to inspire the Nivi style of draping sarees which is slowly becoming a hit with the Indian women.