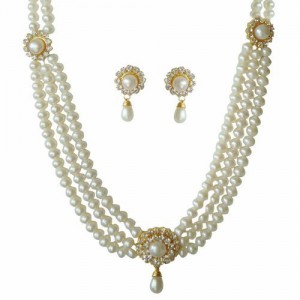 Discovery of pearl in itself is an incredible accolade. Developed within live oysters living in the sea, unlike other precious stones and metals found beneath the earth, these pearls need to be mined. Precious gems need to be cut and polished in order to bring out their sheen, but pearls are like a readymade gift spouting within the lap of nature. They are found in its complete form inside the oysters with a shimmering iridescence and soft lustre. Over the period of decades, natural pearls have been highly prized as gemstones and mark of elegance when it comes to jewelry.

In terms of characteristics, cultured pearls have similar properties as that of a natural occurring pearl. But the instance of natural pearls occurring in the same shape and size is extremely rare, and the advantage with cultured ones is that they are mostly identical. The only difference being that in case of cultured pearls, an irritant is carefully implanted in the oyster by a person. After that, nature creates its own miracle. Whether they are wild or cultured, gem quality pearls are almost always nacreous and shimmering.

Jewelry is the main motive behind Pearl cultivation. Though pearls are also extensively used for accessorising. Pearls have been used to ornament jewellery boxes, decorate lavish couture clothing and also as exclusive hair accessories. Pearls have also been crushed and used in cosmetics, medicines, and in paint formulations.

Since ages, Hyderabad has always been called the “city of pearls”. Even though geographically it’s pretty far from the sea.

The Nizams of Hyderabad led a very opulent lifestyle. Due to their influence, Pearls and precious gems from all over India and even from overseas came to Hyderabad. Initially, the trade in pearls depended on the pearls coming from the Persian Gulf

Real, or naturally occurring and Cultured are the two kinds of pearls. After it is fully formed, pearls are separated as per the shape. The highly skilled artisans drill the pearls either vertically or horizontally. Post drilling, when the pearl actually becomes usable, it is graded as per the
Once this is done, the pearls are graded according to the glaze, shape, lustre, size , sheen and uniformity.

Pearls are put to use to make numerous kinds of jewellery pieces like bracelets, Kundan sets and enameled sets, Satlads (seven strand pearl, set with precious stones), lacchas, chand bali (a moon shaped ear-ring), chokers, rassi (a chain set in the form of rope) chatai (a mat type chain, ear rings and rings), hath phool (for the fingers and the wrist), vaddenam (waist belt) and Tanmani.

Some shops that are famous for selling good quality pearls since time immemorial in Hyderabad are- Mangatrai (Patthargatti and Basheerbagh), Jagadamba (Charminar, Begumpet and M G Road) and Kedarnathji Motiwale. 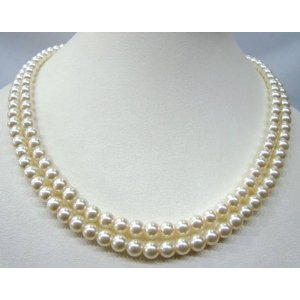 Pearls that are used in jewellery are graded according to the following factors- lustre, size, lack of surface flaw and colour. According to jewellers, amongst all the above mentioned factors, lustre is the most important one to determine the value of pearls. Ger the size, more is its value. Large in size and perfectly round shaped pearls are highly valuable. Teardrop-shaped pearls are often used in pendants.

The eight basic shapes of pearls available are round, semi-round, drop, button, baroque, pear, oval, and circled. The perfectly round-shape pearl is highly valued. Perfectly round and even semi-round shape pearls are used in necklaces. In a jewel setting for a necklace, even button pearls are placed in such a manner that they appear like perfectly-rounded shape from above. However, they are more frequently used in single pendants or earrings where the back half of the pearl is covered, making it look like a larger, rounder pearl.

Dro shaped and pear shaped pearls are often called teardrops, and are mostly used in pendants, earrings or as a centre pearl in a necklace. Baroque pearls are irregular in shape and have a different appeal. Circled pearls are characterized by concentric ridges, or rings, around the body of the pearl.

Of the tree kinds of pearls, Natural, Cultured and Imitation, the natural ones are most valued, and the imitation pearls are of no value. One way that jewelers can determine whether a pearl is cultured or natural is to have a gem lab perform an X-ray examination of the pearl.

Pearls are still one of the most popular gemstones, due to their elegant look and subtle sheen. Popularly used in jewellery and surface ornamentation of couture garments, pearls are being extensively used for decoration of exclusive jewellery boxes. Particularly high-end jewellery boxes use precious and semi-precious gemstones to bring up the luxury and style content.