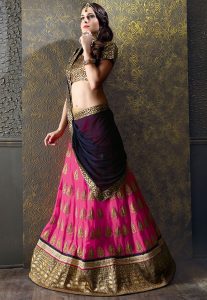 Rajasthan denotes the elegant tradition where you can see cultures from different regions and tribes coming together and forming one story. The clothes are worn by the people of Rajasthan- both men and women have a mesmerizing appeal. The ever famous Chaniya Choli worn by the Rajasthani women is considered one such costume that brings out the true sense of feminism, which is intrinsic to the history and customs of Rajasthan. This traditional Rajasthani clothing is rationally designed to reflect colors in the otherwise bleak deserts of Rajasthan and is ideal for hot, sultry summer season.

Chaniya Choli is a customized version of the Indian outfit, Ghagra Choli. Ghagra Choli has been widely associated with the Mughal emperors and their queens. Since Mughals have been known for their close association with Rajasthan’s Rajputs, hence during the course of their cultural exchange, the outfit of Ghagra Choli evolved and became Chaniya Choli. Chaniya generally has a knee length skirt, ideal for women of Rajasthan.

The outfit, which is known as Ghagra Choli in other states and popularly known as Lehenga Choli in contemporary time features a skirt, generally pleated and paired with a Choli or blouse. Odhini or a dupatta is added to it to cover heads and protect women from heat. It also serves as a piece of modesty. Since a lot of embroidery and work techniques are used for creating Rajasthani Chaniya Choli, hence it features an endless array of patterns and designs, giving a wide variety of choice.

Bright colors, including red, green, blue and yellow have been used in Chaniya Choli time and again for historical, geographical and culturally relevant reasons. The colors provide a lease of freshness in the hot deserts of Rajasthan and have a particular significance. For instance, green includes harmony and the advent of farming or crops; yellow indicates motherhood while red is synonymous with brides and young wives.

Each piece of Chaniya Choli is a reflection of unique designs and ensemble of colors, embroidery, prints and design. 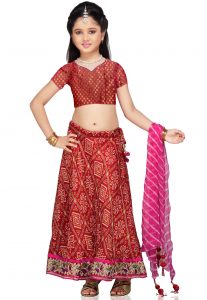 In contemporary times, Chaniya Choli has evolved from being a regular day to day outfit to fashionable attire. Today, Chaniya Choli is a vivid kaleidoscope of cotton and colors and is widely used for special occasions as well as regular wear purposes. Odhini and traditional ornaments are added as an accessory. A decorative sheen is obtained by using mirror work or bright gold and silver Zari or Gota to make Chaniya Choli look fabulously designed with intricate details.

Cities like Jaipur, Udaipur, Bikaner, Kota and Ajmer are popular for designer Chaniya Choli. To ensure that the outfit is comfortable, cotton fabrics are generally used to give the dress a cool and light weight feel. Fabrics like silk, khadi, brocade, and chiffon are also used.

The average prices of a Chaniya Choli can range from INR 500 to more than INR 50000 depending upon the occasion and design and intricate work.

Chaniya Choli comes in different kinds of variety, including Ghagra, which has a full-length skirt, along with blouses and skirts featuring Zari, Resham work, Zardozi, sequins and mirror work with precious stones. Designer versions of Chaniya Choli include different cuts in the skirt, including styles like straight or fish cut, mermaid cut, full flair Chaniya, paneled cut or circular and A-shape cuts.

Chaniya Choli has been worn by Rajput woman for centuries. Even today, Rajputs and indigenous populations of Rajasthan prefer Chaniya Choli to other outfits because of their comfortable fabrics, beautiful mirror work and bright hues. From villages to metropolitan, women wear variety of Cholis, including long blouses to midriff baring blouses and special Cholis called Kanchli or Kunchki.

Daily wear Chaniya Choli is easy to clean and requires a light wash. The ones with intricate work of Zardozi or precious stones should be sent for dry cleaning.