Traditional costumes of Jharkhand are simple and elegant. It is usually a single dress code. Jharkhand got its recognition in November 2000, which was formerly part of southern Bihar. This state has been popularly known as the land of woods- hence the name Vanachal as well. Jharkhand also happens to be the locale for a lot of old and ancient tribal population, which have marked a great influence in Indian traditional wear.

Traditional forms of dressing intrinsic to Jharkhand still go down in history where there are several accounts that speak of the inspiration unique to several tribes present here that go into the making of these costumes. The major tribes that influence the dressing and the dress code of these people are Santhal Pargana also known as the Paharis and Santhals, who follow a unique dress code which is only one of its kind in the way it looks. The cloth its textured, fabrics and imprints are greatly influenced by the tribes and their heroic stories, as well as art and history.

The most prominent clothing used by the men is called Bhagwan. This is a one piece cloth that is draped in such a way that it becomes the entire dress in one go.

The people of Jharkhand don’t follow the conventional and traditional tribal dressing and try to uphold and exhibit their culture and heritage by using the old costumes such as dhoti, kurta-pajama and shirts.

The clothing has imprints or paintings of the various colors of tribal art and life embellished on it. This gives the clothing a special look and appeal. The vibrant colors and high quality fabrics such as silk are some of the important factors that are taken care of by the people while they adorn this costume.

On special occasions and events, men wear their traditional tribal dress along with modern attire thus bringing out the fact that the old can still be blended with the new and create history on its own. 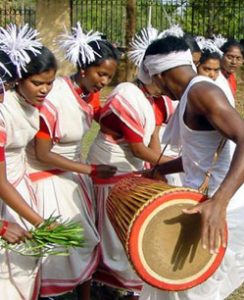 The people of Jharkhand love to flaunt their traditional wear on every possible occasion, so to stay in league with the developing fashion trends and industry they made small innovations and changes in the way the clothes looked. The traditional kurta- pajama is now made more attractive by using a better quality of clothing such as Silk, Chiffon or other fine-textured fabrics with brighter colors and better tribal imprints to make them more captivating. They have also introduced a modern style of Kurta which is teamed up with dhoti thus making it trendy and traditional at the same time. These Kurtas are embroidered with threads that mark the tribe the person belongs to.

The state and its clothing have a global appeal, but it is fairly new in the world of fashion. Several designers have however drawn influence to a great extent from the vibrant and tribal appeal that oozes from the attire, and have used it to showcase their creations.

As for accessorizing the garment, the men usually wear an appropriate headgear and fancy foot wear in order to complete their look. They do not accessorize their clothing as much as women do. The men are also seen wearing a type of necklace made of beads which is specific to their tribes. One common factor between both men and women of this state is that they all make sure they wear a fragrance on their clothing. It is usually fragrant oil or some kind of scent, and these oils are made from the natural resources available.

This combination could be worn to a little pooja next door or an ethnic event happening at your workplace or college. Since it is designed in fine fabrics, the suitability goes well with semi-formal gatherings as well.