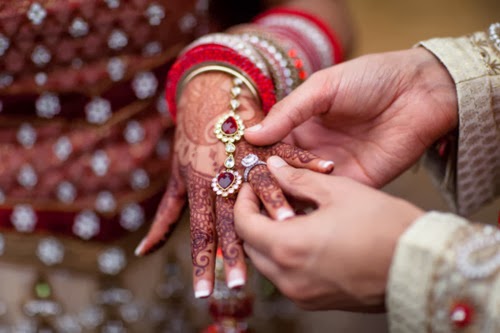 One of the chief highlights of an Indian wedding, before the actual marriage ceremony, is the ritual of Sagai or Kurmai. This ceremony marks the official ‘asking’ of the bride’s hand by the bridegroom’s family. Rings are exchanged between the bride and the bridegroom during Sagai to seal the union of the two individuals as well as their families. This function takes place only post the Roka ceremony and can be held either days, or even months, before the actual wedding date. 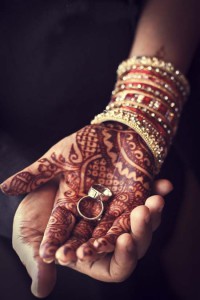 Sagai is traditionally held at the bridegroom’s home where the family members and friends of both the bride and the bridegroom are invited for the ceremony. The bride’s family visits the bridegroom’s family with lots of immaculately wrapped traditional gifts, sweets and dry fruits, and tikka material to perform the ritual of Sagai/Kurmai/Mangni. Nowadays, the tikka ceremony has been combined with the Sagai ceremony. The tikka material that the bride’s family carries to the bridegroom’s home consists of a silver tray with a few grains of rice on it, a silver bowl containing some saffron, 14 chuharey (dried dates) nicely wrapped in a silver foil and a coconut covered in a golden leaf.

At the beginning of the tikka ceremony, the bridegroom’s sister(s) put a fine, silk palla (long scarf) around his neck which he then holds open on his lap when the bride’s family comes to present him with various gifts and sweets. The bride is also wrapped with an ornate chunni (stole). This chunni could be a family heirloom as well, which is passed on from generation to generation. The bride’s father then applies tikka on his would-be son-in-law’s forehead and blesses him. He then fills the palla with sweets and dry fruits, and presents the bridegroom with a gold Kara, some money and/or other gifts like a watch or a gold chain.

In return, the bridegroom’s family also presents the bride’s family with baskets of varied dry fruits like cashew nuts, almonds, coconut pieces, chuahara, raisins, apricots, etc. The bride is also presented with jewelry which her mother and her would-be sister-in-law help her wear. A tiny dot of mehendi is then applied on her palm for good luck. 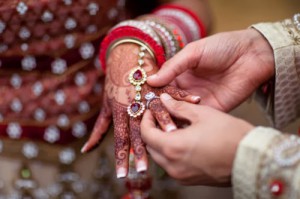 The brides and grooms love to flaunt their regal ethnic wear on this special day. Elaborate lehengas, saris, and sherwanis generally grace the wearers as well as the occasion. Young brides love to go for Neon lehengas in vibrant hues of blue, pink, purple, green and red, which have elaborate zari or moti work. Pretty and delicate jewelry adds to the overall charm and while the style quotient plays an important part, so does comfort. Some brides like to keep their attire simple and chic while some like to go all out and experiment with glamorous styles of clothing. The grooms, on the other hand, go for a sophisticated suit and tie attire or a kurta pyjama which looks fashionable and traditional at the same time. 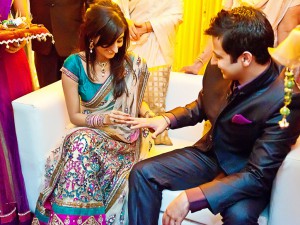 Now-a-days, Sagai ceremonies are also held at large banquet halls where the families and friends of both the bride and the bridegroom are invited. The banquet halls are decorated in a very lavish manner, and lunch/dinner (depending upon the time) is also arranged for all the guests.

Traditionally, only men from the bride’s family were invited to the bridegroom’s home, which is not the case anymore.

The girl was refrained from entering her in-law’s house before the wedding as it was considered to be inauspicious. This concept has however changed over a period of time, especially in urban India where the bride visits her in-laws home for the Sagai ceremony.

The bride’s family never visits the bridegroom’s house empty-handed as it is considered to be unlucky for the couple. Hence, they always carry gifts and dry fruits for the bridegroom’s family.

Unlike the Roka ceremony, rings are exchanged between the girl and the boy, who are about-to-be-married, to mark the official union of the couple as well as their families.