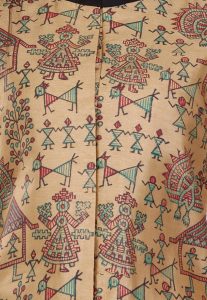 Warli painting is a kind of tribal art practiced by a tribe from Maharashtra called ‘Warli’ or ‘Varli’.  Other local tribes also participate in the creation of these paintings which were traditionally done only on the walls of the house during festive seasons and weddings. In recent times this art form has become popular across the world, with the scope expanding to include paintings done on canvas and painted fabrics. It is distinguished by its simplicity and use of sober colors to depict scenes from the daily life of the tribal people using recurring combinations of symbols, shapes, and figures of life form.

Warli art is the signature art form of the Warli tribe that is located in north Maharashtra, near the borders of Gujarat. The exact origin of the art form has not been discovered but its roots can be traced to the Neolithic period, between 2500 and 3000 B.C. It has been passed down from generation to generation in the tribe, occupying an important position in the Warli culture which till very recently, did not have a written language. Warli paintings were initially done solely by women in a mural form, on the walls of their houses, during important occasions like festivals. These were ritualistic paintings that had to be drawn as part of weddings and births. These were done using washable materials that could be erased and painted over during the next festive season.

Once the tribe was discovered in the 1970s, Warli painting became a very popular tribal motif across India. The paintings then began to be done on paper or canvas, with a wider range of colors and techniques. Warli paintings gained a high ‘art’ value and eventually, they were widely commercialized. Designers began using the distinctive style on clothes and home décor items. It is one of the most popular ethnic prints today.

The original mural-style paintings were done using a very basic technique, with the focus being on the themes rather than the methods.  The walls were made of mud mixed with cow dung and branches, creating the signature ochre red color, on which women made drawings using a white color created by combining rice paste, water and gum. Simple bamboo sticks and twigs were used to create the various designs.

The stark combination of white on red is still prevalent, though other colors and more sophisticated painting tools are used now. Once the Warli artists began to use fabrics and cloths, they adapted thinner brushes and a wider color palette including henna, indigo, earth red and brown. Though natural dyes remain prominent, artificial paints may be used to increase the life of the clothing. 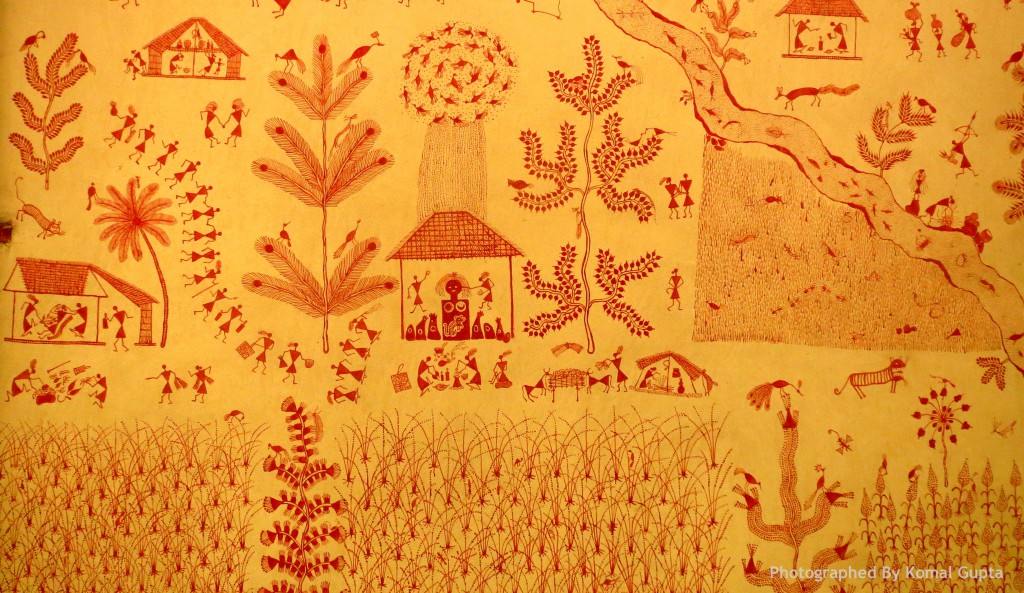 Warli paintings are famed for their simple designs and monochromatic appearance. Unlike other tribal paintings, they are not very colorful and depict scenes from social life rather than elaborate religious texts or epics. Thus, they depict people hunting, harvesting, drawing water from a well, fishing, dancing, celebrating etc. They also reflect the close relationship between the tribe and nature, with a lot of natural motifs like birds, flowers and trees making an appearance. Since they were initially ritualistic paintings meant to celebrate festive occasions, the marriage god Palghat is frequently depicted in this art form. Other tribal goddesses are sometimes depicted in the art, but usually the focus is more on celebrating human life. Individual artists may choose to explore more complex themes through these paintings, and even in the most traditional variations one can see a variety of folk beliefs, stories and customs depicted beautifully. 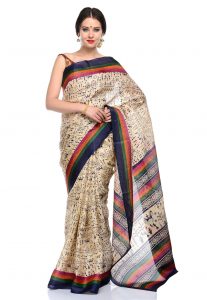 This is essentially a symbolic art form that derives its meaning from the use of repeated symbols and geometric shapes in a loose rhythmic pattern. The circle, representing the sun and the moon, the triangle, representing mountains and trees and the square, representing the ‘sacred land’, are the three basic shapes used over and over again. People are depicted by two triangles meeting at the tip, with wavy lines for hands and a circle for a head. A series of dots and dashes are used to create the details of the painting. Straight lines are almost never used. Another commonly seen feature in Warli paintings is the use of concentric circles of human figures with trees and birds tucked away in the corners.

Warli paintings are today a very popular fashion motif, with designers frequently using them to create fashionable sarees, shirts, skirts, salwar kameez, shawls, stoles, in addition to Indo western tunics, kurtas and kurtis. The paintings can be either directly painted on the fabric or printed on to it. Usually, clothes with warli paintings are made of materials like raw silk and cotton which hold color easily. The stiffness of raw silk is preferred as it creates the perfect canvas to showcase Warli designs. They are either arranged in bold patterns all over the fabrics or restricted to the border areas.

Today Warli paintings have gone much beyond being a simple tribal art. They are considered a sophisticated art form, frequently used to create unique paintings which are sold at very high prices. For the same reason, Warli prints are ubiquitous in fashion and home décor. From designer sarees, silk cushion covers and linen bed sheets to mobile covers, purses, and jewelry, this art has been adapted for a variety of decorative purposes. Warli paintings can also be easily reproduced using printing techniques which has further increased the customer base for this art. Printed Warli designs, though less authentic, tend to come in more diverse colors and fabrics. Additionally, it is no longer the sole domain of the Warli tribe as artists and designers across the world have utilized this style in their creations.

The increasing demand for Warli paintings in urban centers has led to the art form evolving newer, more diverse styles and varieties. This is especially true when it comes to clothes and fashion, where the classic white on red design is not the only option available. Bright colors like neon pink, green and red as well as muted shades of purple, beige, green and yellow are increasingly being used in Warli prints.

A recent innovation adapted by Warli artists is the depiction of modern, urban motifs like bicycles, auto rickshaws and roads. The basic symbols remain the same but the use of modern items creates a very contemporary vibe which appeals to a wider audience.

1) Warli prints and paintings are generally not used on any kind of footwear as this is an auspicious art form for the tribes.

2) Traditionally this art was exclusively done by women but with commercialization and greater demand, it has become the domain of male artists.

2) The cultural intellectual property right of Warli Painting is held by the Warli tribal community which has also set up a not-for-profit organization called the Warli Art Foundation devoted to promoting this art form.

Video on Warli or Varli Art