The Scindias Dynasty of Gwalior

The Scindias are a royal Maratha Kunbi clan in India that belong to the state of Madhya Pradesh. This clan comprised of the rulers of the state of Gwalior during the 18th and 19th centuries who later went on to collaborate with the British Rulers between 19-20th century till the time of independence.

Gwalior has been ruled by the Scindia clan and also has the distinction of having been one of the most developed states of India. Gwalior has a very old and magnificent history as its name is derived from the erstwhile town of Gwalior also known and Gawalier. Gwalior has been ruled by many Rajput dynasties and also by the Mughals. The Scindia dynasty was founded by Ranoji Scindia. However, the association of the Scindias with Gwalior commenced at a time when the Mughals started to lose their prominence due to the rise of the Marathas under the leadership of Shivaji. However, Shivaji’s untimely death passed the power on to the Peshwas which was later grasped by Mahadji Scindia, who was a great statesman and a general. He opposed the English, but later initiated an alliance with them, which brought about a lot of advantages to him in terms of his career and power.

Gwalior was ruled by the Scindias’ up until the independence of India in 1947 with George Jivaji Rao as the Maharaja. However, Gwalior was then merged along with other princely states to form the state of Madhya Pradesh. Later on in 1962, George Jivaji Rao’s widow, Rajmata Vijayraje Scindia became a member of the Lok Sabha. Her son Madhavrao Scindia later went on to become a strong member of the Congress Party and his son Jyotiraditya Scindia is currently a Lok Sabha member with the INC. Rajmata Vijayraje Scindia’s two daughters Vasundhara Raje Scindia and Yashodhara Raje Scindia were also politically inclined and have allied with the BJP. 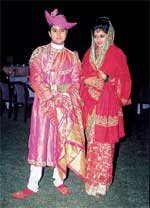 The essential traditional royal garb of the Scindias has been the trademark head dress that has always been donned on special occasions by the royal members of the Scindia family, particularly during festivals, religious occasions and marriages. The menfolk usually dressed up in traditional finery ranging from the ‘Anga’ which is a long coat that appears like a kurta made up of Silk and Brocade with the ‘Pagadi’ and a sheathed sword. This was the traditional attire worn during the 16th and 17th centuries, be it for a religious ceremony or a formal dinner.

The women, on the other side, dressed up in the finest of silk sarees, usually draped in the Marat hi way along with complete jewellery crafted out of the finest gems, pearls and gold.

In India it is easy to distinguish a male royal figure of one state from another by the way they wear the turban or pagadi. This head gear is considered to be an indication of respect, honour, brotherhood and chivalry and was an absolute essential. The material for the pagadi could be anything from fine muslin to chanderi and brocade. The Maharaja of Gwalior had a very unique pagri that was in the shape of a boat called the ‘Shindeshahi pagri’ which gave the clan its unique identity.

During the initial period before British colonization, the attire of the Scindia royalty was mainly traditional that showcased the rich fabrics, gems, jewellery and pagdis of the region. However, slowly, during the British Rule, a lot of the Maharajas and princes formed alliances with the British and other foreign nationals. They even had foreign wives and slowly started wearing suits, shirts, ties, waistcoats and all things British on a regular basis. The traditional garments were later exclusively reserved for particular occasions like solemn pujas, rituals, weddings and religious functions.

A lot of designers are trying to pay tributes to the Maharajas and their style of dressing by creating garments that have a royal element to them. From tailored black tuxedos to the classic bandhgalas with embroidery, there are a lot of specific styles that are associated with the erstwhile Maharajas of Gwalior which have had an impact on global fashion in some way or the other. These classic attires have been given a twist and have been made more contemporary without losing the elegance of royal garments.