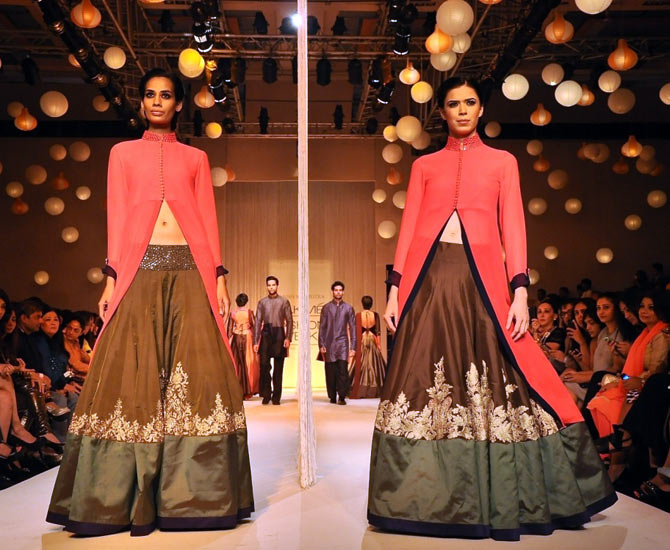 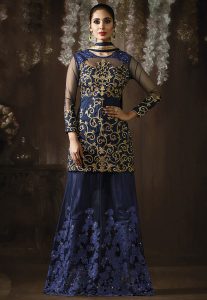 The Sharara is a three-piece outfit with flared pants for lowers, with a join at or below the knee level, generally worn to weddings. The skirt-like outline below the knee is heavily flared ( also called the trumpet skirt) and resembles the shape of an umbrella. The Sharara is of floor-sweeping length ( farshi) and is teamed with a Kurti and one or two Dupattas, the other outfits of the three-piece attire. When worn with two Dupattas, one is used to drape the shoulders while the second one is used as a veil.

The ensemble is usually finely embellished with zari, stone-work, sequins and beads, besides other embellishments. The Sharara is often compared with ‘Gharara’, an outfit strongly resembling the former. The key distinguishing trait between the two is that the ‘Gharara’ flared pants are joined above the knee.  It is a floor sweeping outfit with long flares carried with an embellished dupatta.

The origins of the attire are said to come from the design aesthetics of Mughal royalties. Sharara gained recognition in India with the arrival of Mughals in India. A common attire of women belonging to the royal classes during the period of the Mughal rule, the Sharara has since become popular amongst Pakistani and Muslim women across the globe. Bollywood movies in the 1970’s and 80’s also contributed to the increasing popularity of the outfit in India.

The Pakistani Sharara is worn with short Kurtas which are generally hip-lengthed. Sometimes, the length of kurtas could be longer, ending at or below the knee. However,  the Indian rendition of the Sharara undergone changes and been molded according to traditional & regional influences in India. For instance, in India, Sharara is popularly worn with choli as well. Both the Lehenga Choli and Sharara are accompanied by Dupatta/ Chunnis. 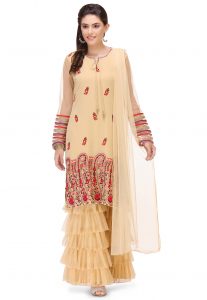 With time, Sharara has been experimented with to come up with contemporary versions of the outfit. One such innovation is the ‘Sharara Suit’, which has a smaller girth in the flares, thus making the outfit resemble the Pakistani ‘Shalwar Kameez’. The Sharara Suit is better suited to be worn to less formal occasions.

Sharara is generally worn to ceremonial occasions, especially weddings, particularly by Muslim brides. However, many North Indian brides have started opting for Sharara for their wedding attire, to experiment with their bridal couture. The outfit is often worn to parties as well. However, unlike the Saree and Salwar Kameez, it is not considered a daily-wear outfit.

Being an outfit that is usually ornately embellished with thread work and other motifs, they are better reserved for special occasions. The simpler versions with comparatively lighter embroidery may be occasionally worn to parties.

Designers are coming up with new cuts and twists to the attire. With the Sharara having found its place in fashion lovers across the globe; it has marked its own niche which seems to get stronger with the passage of time.

The upkeep of the attire depends on factors like the fabric and nature of embellishments that the Sharara has been stitched in. However, since Shararas are usually stitched in royal, expensive fabrics like silk, brocade, zari or velvet, along with zardozi & stone embellishments, they should be ideally wrapped in paper in a dry place, so as to avoid moisture from affecting the sheen of the ornate embroidery done on the attire.

For washing, it is ideal to get Shararas dry-cleaned, while steam-iron suits them better so as to prevent the heat from damaging the fabric or embellishments.