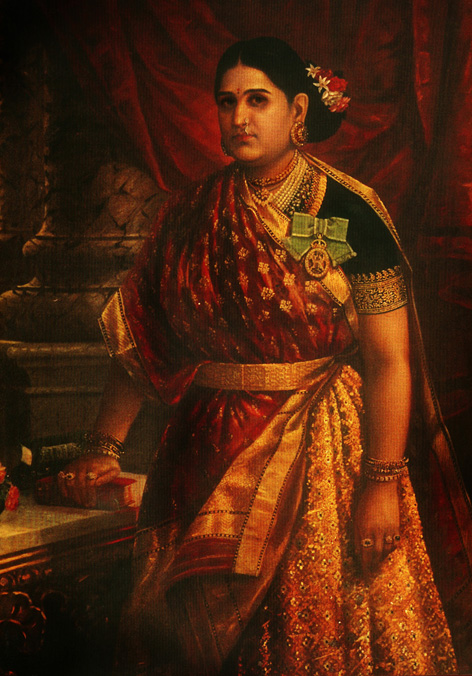 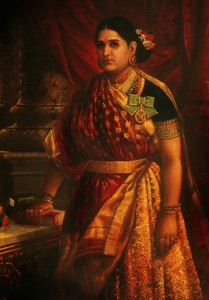 Maharani style drape is a royal style etched in the world of fashion for the elegance, sophistication, radiance and magnificence it flaunts. The highlight of this style is the pallu of this sari that drapes itself across the right shoulder stealing away the attention of the onlookers. It does not give a chance for people to notice the flabby areas of one’s body as it covers them smartly and aesthetically. The radiance of this style mesmerizes not only the entire look of the sari but also the wearer exhibiting this draping style.

Traditionally if we walk down the glorious era of fashion styles and statements that have imprinted their evergreen manner for a lifetime, we can trace the emergence of this style from the traditional roots of the Northern part of India, wherein wedding brides were meant to don this attire to create a magical and a majestic effect to the occasion. This style of sari generally belonged to the upper and richer class of the society, mainly belonging to royal blood.

The main essence of beauty in such saris lied in the way the drape style falls over the body and every work and embroidery innovatively crafted and designed on these saris get highlighted and flashed with utmost prominence. These saris are generally pleated and draped onto to the right side of the shoulder which gives a slim and a sleek fall to the entire attire. These saris are richly studded with precious stones, raw cut crystals, and various other decorative materials, which enhance the outlook of the sari as well as the wearer flaunting this style. The unique specialty of this draping style is the way it camouflages the ‘fat coated’ areas of the body and pulls on all the attention to the artwork indented in the saris. So, those who are hesitant about their shapeless abs can confidently opt for this style of draping to get that slimmer and leaner look. 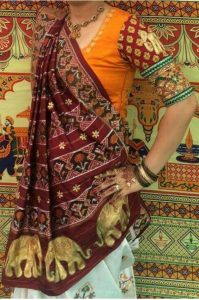 This draping style has been popularly also known as ‘seedha pallu’ draping style which has dug its roots of fame and popularity in places like Rajasthan, Uttar Pradesh, Bihar, Madhya Pradesh and many more such princely states. These saris still continue to showcase the traditional style of draping wherein the pleated tucks are worn onto the right instead of the left shoulder side. These saris till now carry the royalty of the maharanis who wore these saris which showcased their majestic charisma throughout the world. 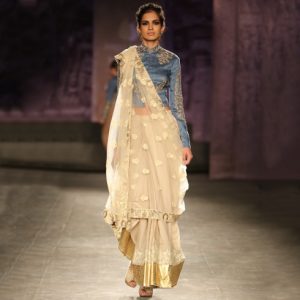 The classical tradition of wearing saris is, however, being outwitted by the other traditional attires like lehengas, cholis, and ghagras. But the beauty a sari can showcase cannot be compared to the traditional attires of today. Hence innovative techniques have been introduced in the world of saris, especially in this maharani style of sari draping. For instance, Boutique stitched blouses matching the style of the sari as well as while tucking the saris have been created, pins are made optimum use of to ensure that the pallu and the sari remains intact.

Basically the maharani style draped saris are best admired during occasions like pujas, wedding celebrations, and receptions, traditional and religious ceremonies. The stately appearance of this look compliments grand occasions to its best.

Crediting to the unique and richly look this draping style showcases, international fashion markets have begun to patronize this style of draping, which has managed to mesmerize millions across the globe. Many foreigners have started to get attracted towards this style of sari drape, as it projects a sense of royalty which soaked the glorious eras of the yesteryear’s.

Precious stones, gems and crystals intrinsically studded in gold or platinum plated jewelry can enhance the richness of the attire. Even the purest form of pearl jewelry can also beautify the outlook of the sari up to a great extent.

The future can witness this style of draping to become a signature style across the globe. There can come a time, when this style may bring back the age old royal status, which has taken a back seat in the modern world of fashion.

Maharani Gayatri Devi can be referred to as a royal example who always donned this style of sari draping in all her legendary years.