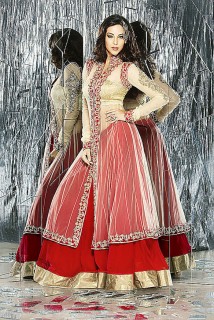 The costumes of Punjab reflect its bright and vibrant culture and also the lifestyle of the people living in this state. The clothing is a mixture of color, comfort, and beauty that indicates the rich traditions and legacy inherent to Punjab. The culture and heritage of this region is one of the oldest but is still alive with the same fervor and exuberance since its beginnings. One of the most famous handicrafts of this state is the Lacha which is crafted with sheer excellence.

The history, mannerisms, and heritage of Punjabi culture are complex and vast. It is a state that gave rise to philosophers, poets, spiritual leaders, artists, musicians, and skilled craftsman. 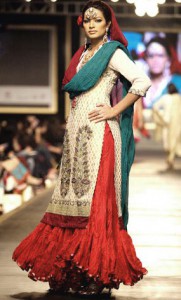 The state of Punjab is known for its vibrant costumes and attires irrespective of who wears them. They are full of life and variance. One of the most famous and widely worn attire is the Lacha. It is also known in many regions as Ghagra Choli, or Lehenga, depending on the region and state.

Lacha is a long flared skirt with adorned hemline, worn with a matching blouse. They are available in different fabrics like Brocade, Chiffon, Net, Crepe, Satin, Silk, Georgette, etc. A lively and gorgeous touch is brought in to this charming dress with a variety of Beadwork, Zari work, Mirror work that is generously layered to perfection on this attire. 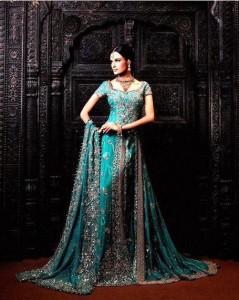 The Lacha is a favorite among the girls and the brides-to-be since it is classy and comfortable. The Lacha is custom made as per the girl’s whims and imaginations. The same could be carried out by the bridesmaids and sisters at the weddings or engagements or on a traditional ceremony or festival. Weaved in the vividness of pink, orange, turquoise blue, green, etc. and sequined with heavy and intricate embroidery, mostly done in the golden or silver thread.

With changing fashions, the colors used have also become subtle and the embroidery on the Lacha has modernized, which now also includes stones, antique gems, sequins and shimmer work in addition to the traditional style.

With now being made in multi facet fabrics and textiles, the Lacha has become a classic piece which represents style and royalty. The modern day styles are not extremely different than the traditional ones, except for in embroidery techniques. Since the Indian fashion industry caters to several tastes, being a multi-diversity country, the Lacha has been made in accordance with one’s personal likes and dislikes. Those who prefer keeping it simple with no flashy adornment can opt for a Lacha with less embroidery and more solid prints, while lavish looking Lachha’s favor the tastes of women who prefer the bling’ factor in their attire.

The women of Punjab always accessorize their clothing. Their costumes are incomplete without the Paranda, the Juttis, Jhoomkas & at least a dozen of bangles. The Lacha is usually accessorized with traditional jewelry made of gold, silver or diamonds. In the olden times the women used to wear beaded necklaces and fancy headgears along with the Lacha.

Punjab as a state itself has a major impact on global tastes. It is a state which is no more local to India, but is well recognized across borders for its diversity in people, food, clothes, language and tradition. The people of Punjab have exhibited their culture in exorbitant ways that has spread far and wide. The costumes, jewelry, and traditions have a major impact on the global market. The women in the west love to adorn the Lacha, especially for formal occasions.