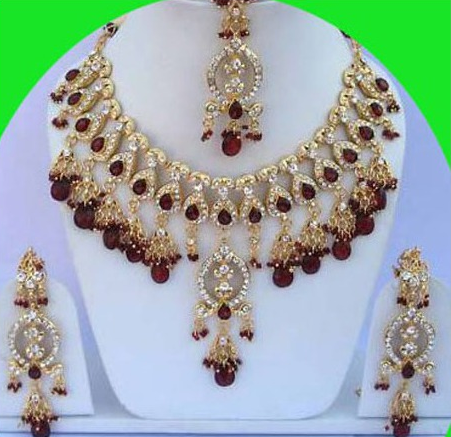 Pota jewelry is a type of imitation jewelry that is quite popular in India. In this jewelry type, pota stones are used to emulate the look of diamonds and, at times, semi-precious stones. These are mainly different colored, non-shimmering stones that are set on metals to make it look like precious jewelry. This form of jewelry is quite popular as it allows women to wear them on a daily basis without worrying about ruining the jewelry piece itself. It is also an extremely budget-friendly form of jewelry which is another factor that really adds to the charm. Pota jewelry is also referred to as stone work jewelry or pota stone jewelry at times.

This form of jewelry came into existence with the onslaught of street jewelry or junk jewelry in India. A market emerged within the less well off sectors in India for jewelry that would emulate the look of expensive jewels but is is in essence not that expensive. Craftsmen and jewelers that specialize in creating this form of jewelry are scattered throughout India and this style is not specific to any state in India.

The Making of Pota Jewelry

Pota jewelry can be made in different ways. When a metal frame is being used to create a piece such as a necklace or earrings, the metal is first melted down until it reaches a liquid state. Once this happens, the metal is poured into moulds or casts where it is allowed to solidify. When it is hardened, the stones are embedded on the appropriate areas using industrial adhesives. Once the piece is created, it is allowed to rest for a day before being moved to a store.

On the other hand, when beaded jewelry is being created with pota stones, the beads are strung along a length of string and so are the stones. Once the design is created, clasps or hooks are added at the two ends of the strings and the piece is ready to be worn. Any additional embellishments take place after all of this has been achieved.

Pota jewelry is available in different forms and styles. The two forms that it is available in are metal based jewelry and beaded jewelry (both these types are supported by strings). Both variants are available in necklaces, earrings, rings, maang tikkas, nose rings and toe rings.

Pota jewelry has a flourishing market in India and has even been seen on the runway where the show or the line of outfits are slightly street inspired. Pota jewelry that emulates diamonds are usually used on-screen in Bollywood movies instead of real diamond jewelry in order to save on the budget of the film as well as prevent any losses in case of a mishap. Professionally made Pota jewelry that is used on screen is so impeccably crafted that most members of the audience tend to believe that the jewelry is completely authentic.

Globally, Pota jewelry is one of the well-known forms of jewelry from India and this is worn the way younger women tend to wear junk jewelry. Worn mostly by working professionals, this form of jewelry has a steady market abroad as well.

Pota jewelry was originally intended to be a form of jewelry that was accessible to the masses. However, due to its unique aesthetic appeal, more and more designers have started creating their own up-market line of Pota jewelry, which is, ironically, quite expensive.

How To Wear This

Since this is mostly worn for casual events or semi-formal events, almost any outfit that is suited towards those occasions can be worn with this type of imitation jewelry. While wearing large earrings, it is always better to tie your hair back in a braid to show the piece.

Pota jewelry must be kept in a proper jewelry box or a regular box that is lined with cotton in order to protect the surface of it from damage. It’s always better to keep if away from water as the color of the metal or the coating on it can fade.