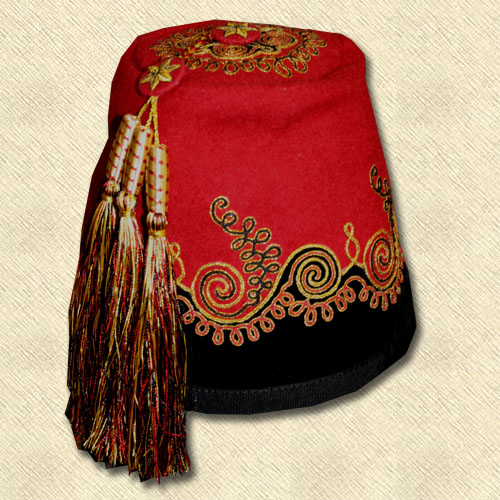 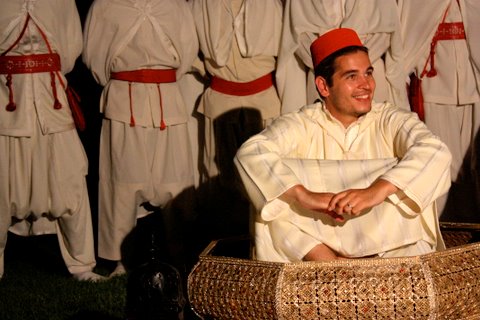 The Fez Cap is a cap of a shortened conical shape or having a cylindrical look, having a decorative trail of colored fabric or designed material on the top. The Cap is made of treated woolen material which is moldable into a required or customized shape. The Fez is designed as a very classy combination of material, appearance, and luxury. Introduced as an identification bearing accessory during the earlier centuries, it has evolved into a modern Cap of luxurious or recreational purpose.

The naming of the Fez Cap was addressed from the Moroccan province of Fez. It was designed during the Ottoman Empire and consequently rose to fame in later years. The Fez Cap is a decorative garment which signifies relaxation, peace, classiness and objectiveness over spirituality. This is a justification for its prevalence among the Muslim followers in Andhra Pradesh.

The Fez Cap originated in the reign of the Ottoman Empire in the early 19th century, as a reformation in the dressing garments of the army. The reformation was intended to be westernization through ban on the usage of turbans. It was also featured as a regional religious identity, through its usage by the Andhra Muslims.

Being a very classily designed Cap, the Fez is styled and created as an assortment of refined woolen fiber which is not woven. The stiffness of the Fez Cap varies on a considerate range in accordance with the group it is to be merchandized and associated with. The chief design upon the refined fiber is classified into two types. One resembles a conical structure after it has been adjusted lengthwise, and the other represents a cylindrical shape. The Fez bears a characteristic structure of fringes known as a tassel.

The Fez has been an internationally recognized dressing article since its inception. Over the years, it has gained an increasing fame and accreditation across the Asian Continent and has furthermore become a communal identifier for many communities. Regarding the Islamic view, it is meant to represent the Muslim ideologies along with the contribution of commitment for the Muslims in India. In business ventures of the international residences, the Fez is used as a gesture of welcoming and cordiality towards the visiting foreigners.

Increasing the demand and constant alteration of appearance and qualities of the Fez has always been an integral part of the Fez manufacturing business. The growing acceptance of every version of the Fez has been a striking aspect during its developments. The earliest Fez Caps had a trademark red body decked with tassels colored in blue. The features of the later designs of the Fez involved altering the original truncated conical feature or the cylindrical appearance into an elliptical structure. This also included newer hues and shades of colors as well. The degree of hardness of the original Fez Cap has been made to go through transitions as well.

The Andhra Muslims dress themselves and the Fez cap in accordance with their communal sentiments. The men prefer wearing the Fez Cap with kurta pyjamas. Even during modernization, the traditional Andhra Muslims are attached to the custom of dressing in the Fed Cap along with their customary attire, as Andhra Pradesh itself represents a domain of the union of cultural variations. The Muslim women use the Fez conservatively to harmoniously combine the Fez Cap with their traditional salwar and kameez attire. Many women exhibit brief experimentation in their method of draping the saree, while maintaining the norms and conservations of their culture.

With India being a land of the union of the largest diversities, the requirement of bringing about a synchronized characterization of the Fez Cap with the social and cultural norms had become a necessity. This resulted in the manufacturing of oval shaped and conservatively attired Fez Caps in Andhra Pradesh. The Fez Cap also represents the features and characteristics of the Andhra Muslims through their depiction of communal preferences, religious devotion, social class and their day to day life.

Across the vast domain of cultural and social inter-association of India, the appraisals and recognitions of the Fez Cap have spread further into the communities. The Andhra Muslims view the Fez as a cultural symbol and regional religious identity. The associates of this community have also acknowledged and carried the fame of the Fez to their neighboring regions. This has further introduced and enhanced the recognition of Fez in the natives of the adjoining nations. Thus the Fez manufacturing industry and export marketing industry has obtained and are regularly procuring benefits and necessary profits.

The future prospects of the market and customer domain of the Fez Cap get enhanced by its regular increasing demand and widespread recognition into the outer world. The Fez Cap may go on to become an international accolade in head dress certification.