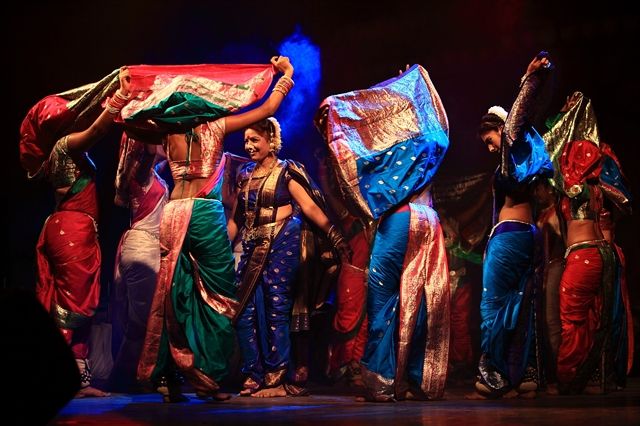 Lavani is a combination of song and dance that is most commonly associated with the state of Maharashtra as well as the surrounding areas in the Konkan or Coastal Region. The word ‘Lavani’ is derived from the word Lavanya, which means ‘beauty’. Lavani aims to take various aspects of social life such as politics, religion, romance, etc. and present them in an entertaining form.

The Lavani dance originated as a form of morale booster for warring troops during the 18th and the 19th century when the state of Maharashtra was embroiled in conflict and turmoil.

The dance form reached the peak of its popularity during the rule of the Peshawari Dynasty that was seated in Pune during which it was given support by the ruling elite.

The Lavani dance is generally performed by Dhangars or shepherds living in the Sholapur district of Maharashtra. They are inspired by nature and the dance form contains tales of the birth of Biruba, their deity.

The more commonly performed forms of the Lavani dance are concentrated in Maharashtra and are not restricted to the Dhangar community.

It is performed by women who dance to the beats of a Dholak, which is an Indian drum. It isn’t uncommon for the Dholak to be accompanied by other instruments like a cymbal called the Manjeera, a string instrument called a Tuntuni, a Daf which is quite similar to a tambourine but has a single leather surface, along with a harmonium.

The tempo of the music and the dance is quite fast and the music is supported by the performers themselves who wear ankle bells called the Ghungroo. The quick tempo helps pump up the dances as well as the crowd and a Lavani performance is generally quite vivacious and energetic.

Shrinagri Lavani is more popular than Nirguni Lavani and is performed in theaters as well as Bollywood movies. Shringari Lavani deals with a multitude of genres, with the love between a man and a woman being the most prominent.

The quintessential part of each performance is the saree. The saree worn by the performers is longer than the usual and is called a nauvari, which is wrapped around in a kashta drape.

A nauvari saree measures 9 yards in length. The unique kashta drape is not only much more comfortable as compared to other forms of draping a saree, but allows for a greater movement. Since the nauvari saree generally goes hand-in-hand with the kashta drape, and the dance requires fast-paced movement, traditional cotton sarees are the ideal choice.

Although it can be argued that it is easier to manipulate lighter materials like chiffon into the kashta drape, cotton is better because it will prevent the saree from riding up. Moreover, cotton is a cool and strong fabric that absorbs sweat easily and is less likely to tear or get damaged.

Aside from the saree, the performers also tie their hair back in bun called a juda or ambada. The performers may also choose to wear a gajra which is a flower garland for the hair. Performers also wear heavy jewelry that includes necklace, earrings, a nose ring called a nath, and bangles.

They also wear a kamarpatta which is a belt at the waist. On their feet, performers wear payal or ghungroo which not only looks beautiful, but can also be considered a musical instrument in its own right. Lavani performers also put a large red bindi on their forehead.

Perception of the Dance Form

Its popularity has reduced in the recent times and most people consider it passé. Due to the sensuous nature of the dance form as well as its depiction in mainstream Bollywood films, the performers of Lavani are stereotyped and discriminated against.